Cami Kennedy watches as her three-year-old daughter Suzana pours a cup of tea for herself. Kennedy says her daughter has been drinking decaffeinated tea for as long as she can remember.

Cami Kennedy and her daughter Suzana, 3, fill their cups for tea time recently in their Lawrence home. “I don’t purposely give her any caffeine,” says the Lawrence mom, who treats her daughter to noncaffeinated children’s tea. “You’re 100 percent supplying what they take in, so I just feel more responsible for keeping her away from things that aren’t necessary.”

Glancing into his clinic waiting room, the pediatrician spies a child young enough to be aged in months and weighed down by a full diaper, sipping an adult-sized bottle of soda pop.

Forget for a moment the sugar-fueled childhood obesity epidemic. What also concerns Lauer is the other component that makes soda so addictive: caffeine.

The stimulant that so many sleep-deprived parents rely on isn’t so good for their kids — with or without the sugar. Yes, while caffeine may not be as much of an advertised evil-doer as sugar, it certainly wears a black hat as far as your child’s diet is concerned.

“The problem is that it sneaks into their diet in a lot of ways now, and it’s such a common thing for adults that we really forget what it is,” says Lauer, vice chairman of clinical affairs in the pediatrics department at Kansas University Medical Center. “And what it is a psychoactive drug that has numerous effects both in the body and the brain.”

Those effects are both obvious and subtle, especially when dealing with young children. Caffeine consumption leads to lack of focus, sleep disruption, dehydration — caffeine is a mild diuretic — and bone density loss because caffeine interferes with calcium absorption.

And then there are the related issues, including weight gain from sugary, caffeinated drinks and tooth deterioration from the sugar and acid in caffeinated soda.

“It certainly has numerous effects, but the biggest ones that we worry about is the disruption of sleep and the lack of focus that goes with it,” Lauer says. “After a certain point, it can help, but then it makes things worse, so it really becomes a big deal.”

For just those reasons, Cami Kennedy won’t allow her 3-year-old daughter Suzana have caffeine, even in the chocolate form.

“I don’t purposely give her any caffeine,” says the Lawrence mom, who treats her daughter to noncaffeinated children’s tea. “You’re 100 percent supplying what they take in, so I just feel more responsible for keeping her away from things that aren’t necessary.”

Do you let your children have drinks that contain caffeine?

Lawrence dad Danny Veerkamp also puts the kibosh on caffeine, lumping it in with all the other ills of the American diet he doesn’t want to pass his son’s lips. 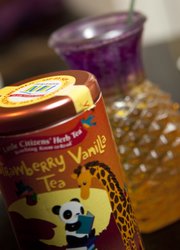 Cami Kennedy and her husband, Jeff, buy Suzana a special kind of herbal tea made for kids.

“(We avoid) the usual stuff that they talk about that you don’t want to let kids have: Caffeine, high-fructose corn syrup, refined sugars or highly refined carbohydrates,” says Veerkamp, dad to Finn, 7.

Dr. Terry Riordan of Lawrence’s Pediatric and Adolescent Medicine, 346 Maine, says that it’s hard for many parents to avoid the trap of “do as I say, not as I do” when it comes to caffeine. Sleep-deprived parents may use caffeine as a crutch early in parenthood and be unable or unwilling to drop the habit once their child is old enough to want a sip from mommy or daddy’s cup. Even Kennedy and Veerkamp cop to having caffeine occasionally — out of their children’s sight.

“Kids have habits that their parents have,” Riordan says. “And it’s difficult for the parents to go off caffeine because pop tastes different without caffeine in it, and they don’t like the taste of it.”

Lauer recommends that parents focus on reducing or eliminating the major sources of caffeine — soda pop and chocolate — from the whole family’s diet.

“It absolutely has to be a family effort, or it’s not going to work,” Lauer says. “Telling many families or parents that they are really going to have to be the role models and cut out the Diet Cokes and pop and everything is a really hard-sell.”

Maybe because of that hard sell, Riordan says that in his office he preaches moderation of all the dietary evils with the hopes that in the end his patients will ingest fewer of those dietary evils — caffeine, sugar, fat, etc.

“Anything in moderation is OK,” Riordan says. “But a can of pop a day every day is not moderation, it’s too much caffeine and too much sugar.”