It's fair to say the American Indian activist and actor has earned that designation.

"I've made a difference in everything I've participated in," Means says.

The 70-year-old first came to the public's attention in the 1970s as a leader of the American Indian Movement, taking part in many of the decade's most prominent national protests: at Alacatraz, Mount Rushmore, the Mayflower and the 71-day armed occupation at Wounded Knee.

To modern audiences he's more familiar for his acting career. Roles include playing Chief Chingachgook in "The Last of the Mohicans," the Medicine Man in "Natural Born Killers" and the voice of Chief Powhatan in Disney's "Pocahontas." Most recently, he appeared in the adventure "Pathfinder" and as Wandering Bear in an acclaimed episode of TV's "Curb Your Enthusiasm."

Whether serving as the 1984 vice presidential candidate of the Libertarian party or being immortalized on canvas by artist Andy Warhol, it's clear to see why the L.A. Times once called Means "the most famous American Indian since Sitting Bull and Crazy Horse."

Means is heading to Lawrence this weekend as the special guest of the sixth-annual American Indian Stories N' Motion Film Festival held at Haskell Indian Nations University. He'll present and discuss his movie "Rez Bomb," an indie feature set on the Pine Ridge Indian Reservation in South Dakota, where he was born.

Q: What's the most common question you're asked by students?

A: What is the Indian experience in American film. I have to give them a historic answer as well as a modern one. That's what I'll be talking about at the film festival.

Means with Daniel Day-Lewis in "The Last of the Mohicians."

A: In the '70s and '80s we thought they got it. They were finally treating us with respect. Then they do an about-face and become as bad, if not worse, than the treatment before. It's a horrible, racist, stereotypical image - racist to the point of genocidal. It engenders into the entire American psyche that we are primitive, dirty idiots.

Q: Can you give me an example of a movie you feel this way about?

A: "Dances with Wolves" - even though the liberals loved it. "Missing" by that bald-headed, redhead kid (Ron Howard). "Black Robe" from Canada, which was the most vile of them all. ... The TV series "Into the West" that won all those awards. Anytime you portray Indian people in a stereotypical way, you win awards.

Russell Means, left, and Dennis Banks, speak to reporters during the 1973 American Indian Movement standoff at the Pine Ridge Reservation in South Dakota. Means hopes to make a film of this historic event called "Wounded Knee 1973."

Q: What film role do most people associate you with?

A: "The Last of the Mohicans." I'm proud of that because it's a classic. It endures. But even that was not perfect.

Q: What can you tell me about "Rez Bomb"?

A: It's a simple love story set on a reservation about poor people who are down and out. It reflects the reality and the economic position, especially of the leading lady (Wichita native Tamara Feldman).

Q: What do you remember about working on "Curb Your Enthusiasm"?

A: Man, that was perfect. And when they had the audition, you should have seen the lineup. Normally, I only audition for white modern roles. I don't usually audition for Indian roles because I've been there, done that. But I agreed to audition for that. They told me I had to ad lib. They had their set lines. But the scene that's so famous (involving Wandering Bear's cure for Cheryl David's "female problems"), I ad-libbed that. They all laughed so hard that they hired me on the spot.

Q: Looking back on the AIM era of the 1970s, what was the greatest accomplishment to come out of those struggles?

A: Self-dignity and self-pride - something you can't measure. But it's manifested today in every aspect you can think of. 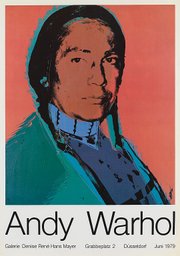 A 1976 portrait of Means by Andy Warhol.

Q: Why do you prefer the term American Indian over Native American?

A: The word "Indian" is an English bastardization of a Spanish bastardization. Columbus wrote "una gente en dio" - "a people in with God." He went on to write that they are so peaceful and generous as it to be a fault. Therefore they'd make excellent slaves. The Spaniards started calling them "indio." That stuck. This is 100 years before the English conquered the sub-continent they called India. We were the first with that name. Then the English bastardized the Spanish to "Indian."

Q: Do you have a dream project?

A: Yes I do. I co-wrote a script called 'Wounded Knee 1973.' Every time we've made the rounds in Hollywood we'd pitch the project. We'd go in with all the data. Understand, I'm well-respected in Hollywood because of my activism. It opens doors. Plus I did "Last of the Mohicans," "Natural Born Killers" and "Pocahontas" - three movies that have made over $100 million. That's the success benchmark. Consequently, a lot of doors are open to me beyond just being an actor. We'd go in and bring our statistics about the history of movies from the '50s to now that treated us with dignity. And every one of them made beaucoup bucks. There's no reason not to make a movie that treats us with dignity. But there were no takers. Now I've got a new management company that has influence, and we're making the rounds again. It might actually be made 40 years after it happened.