Book signing and talk: "Life After the Cult — A Survivor's Lessons," by Carolyn Jessop 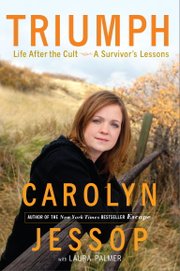 Carolyn Jessop’s story is quite simply one of the most disturbing, yet inspirational life stories you’ll ever read.

Of course, there’s no way to boil it down into a something that fits in the newspaper — that’s why she’s written two books now, the second of which was just published, “Triumph: Life After the Cult, A Survivor’s Lessons.”

Jessop was a member of the Mormon sect called the Fundamentalist Church of Jesus Christ of Latter-Day Saints (FLDS). The sect made national TV news in April 2008 when the state of Texas raided the FLDS’ Yearning for Zion ranch and took custody of some 460 children believed to be in danger from child abuse and illegal marriages, and a cache of firearms that included weapons capable of destroying tanks.

Jessop had fled the FLDS five years earlier. She had been married to the leader of the Texas ranch, Merril Jessop — one of his seven wives at the time — and had eight kids. In 2003, her oldest daughter was about to turn 14 — the age that she knew many of the FLDS girls were being married by the church. She feared that once she was married off, she would not be able to protect her from abuse.

“My back was against the wall,” Jessop says. “It was a lose-lose situation for me. The best-case scenario was to try to escape, and if I could get to the authorities, there was the possibility that I might be able to protect my children.”

That’s exactly what happened. Jessop not only won her custody battle, it precipitated the raid on the Texas ranch and the current trials of 10 FLDS men, including Merril.

Jessop spoke with us to preview her book signing and talk May 10 in Kansas City.

Highlights from the full interview

Q: Was the government investigating crimes at the FLDS before you left the church, or did their investigation stem from your involvement?

A: No, they were not investigating the church until I left. Part of the reason I went to the authorities is that they were hunting me down. I escaped with my kids, and then I was hiding in the city in different peoples’ homes. They had men scouring Salt Lake City for me before I even got here. Warren (Jeffs, leader of the FLDS) put word out … “Get her found, she’s going to cause us problems” …

My custody case became high-profile, and I was the first woman ever to leave the FLDS, get all of her kids out and take them on and get legal custody. In a roundabout way, that’s when they started investigating the FLDS … they found one crime, they get into that, and there was crime leading everywhere. There were a lot of people being hurt, and a lot of minors …

The state of Utah took the approach that if they could put Warren in prison they could stop the crime. They thought if they got the big guy that was telling everyone to do the crime that it would stop. Unfortunately, that’s not the case … I told them straight-up that the problem’s the lifestyle. The lifestyle created Warren, and it’s created a lot of him. If you take him down and put him in jail, you’ll have a whole bunch of other people pop up who are just as bad.

Q: Most people familiar with the raid on the Texas ranch have seen video of women defending the FLDS on TV news — these videos went viral online because the women, frankly, were strange — talking in high-pitched voices and smiling oddly. What was your reaction when they became so public?

A: I knew most of those women personally, and it was tragic to me because when I left they weren’t talking that way. A lot of things, I think, got pretty bad after I got out … It just ripped my heart out. But at the same time, while that whole thing was happening, there was not a day that I took my kids to school that I was not thanking God that I was able to get out of that and protect my children … living in this country, with freedom, I think people take for granted things that they shouldn’t. Because I’ve lived a life where I didn’t even know freedom existed. I didn’t even know what it was like to get out of bed and know you can make the decisions of what you’re going to do with your time …

It’s tragic when you see the results of peoples’ lives when they’re in an environment that they don’t have control over ... They’re literally living in prison, in their own minds, and being controlled in ways that are just improper. It’s incredibly tragic that that’s happening in the freest country in the world and there’s just not enough being done about it … That’s one of the key reasons I’m speaking out …

What I feel like is the more powerful part of the book, that’s the most beneficial, is the second two-thirds — which are the tools I used to get out of this. They’re quite broad and can apply to people’s lives in many ways. Taking on your Goliath, things that are bigger than you, that seem bigger to life. I think so often we sell out to things that we don’t need to.

Q: Are you still a Mormon?

The Mormon church is so different from the fundamentalist movement that they’re hardly even similar. I did at one point take my kids to the Mormon church, and I just felt like I was in a foreign country. There was almost zero similarity, other than the Book of Mormon. But the interpretation I grew up with was so opposite and different … that it was just mind-boggling and very confusing …

The Mormons are quite strict about coffee and alcohol — many of the leading people in the FLDS were alcoholics. We had alcohol in our homes, we drank alcohol. It was a common part of life. We drank coffee — it was not taboo …

I have no desire to be Mormon. I don’t have anything against it or any other religion, I just haven’t had a desire to be a part of anything organized. I’ve heard a joke before, and I agree with it:

“People who go to church are afraid of hell. People who are spiritual have been through hell.”

I do see myself as a spiritual person, I just don’t have any desire to fear God or fear the afterlife, if there is one. I just feel like I should live my life as good as I can and do what I believe is right, and if there’s something after this it will take care of itself.