Free at last: After months of anticipation, bottles of Free State beer on sale Friday

Mike Schard and Kyle Case of Standard Beverage Corporation of Lawrence unload and stack the first cases of bottled beer from Free State Brewing Company at Cork and Barrel, 23rd and Iowa streets. The local microbrewery first started trying to bottle beer two years ago and has finally reached the point where it can supply stores in Lawrence. Liquor stores in Topeka, the Kansas side of Kansas City and Wichita should start seeing the beer in the next month.

Kyle Case of Standard Beverage Corporation of Lawrence, unloads some of the first cases of bottled Free State Brewing Company beer at Cork and Barrel, 23rd and Iowa streets, about 8 a.m. Friday morning. After years of waiting, the popular local brewery is now ready to distribute bottled beer around Lawrence and soon across Kansas. 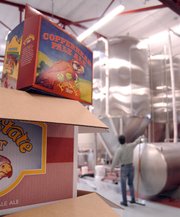 The four Free State beers that will be initially distributed in bottles around Kansas starting Friday in Lawrence. The label and box design were done by Lawrence's Callahan-Creek, Inc.

"Barring a flood or tornado, Free State bottles will be for sale Friday morning."

The beer sold at Free State Brewery is now available at local liquor stores and around the area. The brewery's top four beers are currently available.

So said owner Chuck Magerl after the last of 1,600 cases of Free State Brewery's first bottled beer was picked up for distribution to Lawrence liquor stores Thursday afternoon.

Magerl is understandably evasive on definite timelines when it comes to the years-in-coming schedule for bottles of Ad Astra, Copperhead, Wheatstate Golden and Oatmeal Stout.

First, there was the 2008 fire that set production back two years and caused $1 million in damage to Free State's brand new bottling facility. Then there were the pesky little details of packaging thousands of bottles for mass distribution, which delayed distribution a few weeks in May.

Like how to efficiently unfold six-pack carriers en masse without a specialized machine. Or how to fine-tune the Laverne & Shirley-style conveyor equipment that rinses the bottles, fills them with beer, caps them, glues on the labels and queues them up for packaging.

"It took us longer than we thought to dial in the equipment — both the bottling and labeling components — to get it to the standards we expected," Magerl said. "It just took us a little extra time to make sure the equipment was working to our specs."

Magerl's not sure how their equipment's capacity will handle whatever demand there is for bottled Free State beer, so he won't venture a guess on how wide and how far and how soon Lawrence's beer will be available. Afterall, there's no speed switch on a brewery operation.

"You can't push fermentation," Magerl said. "The yeast will only operate at a certain pace and we don't have any intention of cutting short the normal aging time just to get more beer into the marketplace. We've got our tanks full and are brewing every week, but not over-extending ourselves and causing shortages in stores. That's why we're rolling it out on a staged basis rather than trying to say 'Come on everybody in Kansas!'"

For now, he could say 'Come on everybody in Lawrence,' though. For Friday anyway.

Jeff Jensen, owner of Jensen Liquor, has no doubt it will go fast at $7.99 a six-pack (note: bottles will only be available at liquor stores initially — Free State has no plans to sell them at the brewery at this point).

"The hype has been in the air for a couple months now," Jensen says. "Really, the excitement is at a fevered pitch, I'd say."

He doesn't necessarily expect to see people camped outside his store when he opens at 10 a.m., but he says that might just be because word hasn't got out yet that Friday is indeed — at long last — THE day.

"Once the public actually knows that tomorrow's the day, I think people will be here very early in the morning when we open up, for sure. Everybody's super, super excited."


Note: A feature on Chuck Magerl is coming Tuesday, as well as a Thursday What is That Thing? story on the Walruff Brewery, the late 1800s Lawrence company that inspired Magerl to quit his engineering degree at KU (one semester before graduating) to start Free State Brewery.

I love that they're going to Wichitany before KCMO. THAT is Free State beer.