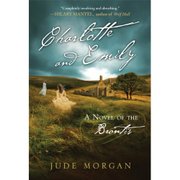 It takes only a few pages into the new biographical novel “Charlotte and Emily: A Novel of the Brontes” (Griffin Original, $14.99) to understand the source of the Bronte sisters’ dark tales.

The book opens on the evening before their mother dies, just the first in a series of calamities that propel the Bronte children to turn inward and seek solace in the imaginary world. Author Jude Morgan does a heartrendingly good job fleshing out facts from their life into a readable — and, sadly, realistic — story.

The two elder sisters, Maria and Elizabeth, step into the maternal role, only to later suffer humiliation and neglect at an oppressive school. They succumbed shortly thereafter to illness. Young Charlotte went from being a protected middle child to being the oldest, and, in Morgan’s imagination, was compelled to lead her siblings in the funeral procession. Emily balked at participating, declaring: “It’s just too awful.”

Life improved little as the Brontes grew up. Having no dowry to offer potential suitors, the sisters worked as teachers and governesses while they watched their brother — their last hope for financial security — fail in endeavor after endeavor. Writing was a rare high point in their lives — first as children, in tiny books whose pages were carefully sewn together, then surreptitiously as adults, their guilty pleasure. They lived in an era when writing was considered frivolous at best, and it was unthinkable that a woman might write a novel of general interest.

Morgan beautifully captures their passion for the written word, conjuring Charlotte’s imaginary world and its characters, then explaining: “She should not think of them because they were not real, meaning they had no physical existence — yet how so? She had seen Zamorna standing at the schoolroom door and he had been real down to the last grizzled hair and the last twist of gold braid, while all the row of sighing pinafored misses and their slates and chalks and the very grammar-book in her hands were grey, insubstantial things wavering through cold dawn mist.”

While the book’s title capitalizes on the fame of the two most famous Brontes — the authors of “Jane Eyre” and “Wuthering Heights,” respectively — it is more accurately a novel about the whole family, and winningly so. Their incredible story and Morgan’s deftness in telling it make for a thoroughly enjoyable read.