Everything old is brew again

The old Walruff Brewery was killed by prohibition, but its legacy lives on in Free State

An illustration of the Walruff Brewery in 1880 from The Western Brewer.

This story is part of our “What is that thing?” series, which takes a look at the stories behind unusual objects around our community. If you have a mysterious object that you’d like us to look into, e-mail it to features(at)ljworld.com

What still stands of the brewery, north of Second and Maine streets.

The front of Walruff Brewery circa 1887. The stable is visible at the far right. 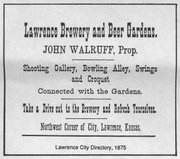 From the 1875 Lawrence City Directory

An ad for Walruff Brewery.

An early label for Walruff beer.

"... because without beer, things do not seem to go as well."
—Diary of Brother Epp, Capuchin monastery, Munjor Kansas 1902.*

As Lawrencians, we're all familiar with the Free State Brewing Company shirt with this quote.

But have you ever considered the significance of that date?

Brother Epp was extolling the virtues of beer some 20 years after Kansas had banned it from the state.

Epp wasn't exactly a rebel, though - many Kansans were ambivalent about state prohibition. Enough everyday people evidently agreed with Epp's sentiment such that Lawrence's own brewery operated openly years after it became illegal.

In fact, the brewery's owner - John Walruff - was an active crusader for seven years against Prohibition in Kansas, until his plight was cut short by the U.S. Supreme Court.

"John Walruff ... has gained a national reputation," the Lawrence Tribune wrote of him in 1887. "The popular heart of the busy world sympathizes with him."

When Walruff got into the brewery business, he was already a wealthy man. He'd been a locksmith and machinist in Cologne, Prussia, before landing in Ottawa. He farmed in Ottawa for seven years before turning to politics and banking, and building a mansion that still stands at Third and Locust.

His younger brother, Joseph, was seeking fortune, too, opening The Walruff Brewery in 1867. Not long after, though, a fire destroyed the building and the $6,000 insurance money wasn't enough to rebuild. Joseph asked his brother for help, and with a $50,000 investment the Walruffs rebuilt bigger and better.

There was a "drinking parlor on two floors where tap beer sold for five cents a glass. ... The brewery garden stretched across five wooded acres complete with lawn bowling, swings, croquet wickets, strolling peacocks and a shooting gallery. (And there were) long rows of canopied tables laden with bountiful servings of pickled herring, boiled ham, rye bread, pretzels, and Swiss and Limburger cheeses."

The Walruffs brewed 2,000 barrels a year - all of which were aged and stored in a network of tunnels under the brewery using ice and the cave's naturally moderate temperature.

The brothers had a virtual beer monopoly on Lawrence's 23 saloons and five wholesalers, and their reach extended out of town via the railroad.

Brewing thrived elsewhere in Kansas, too. Higgins' book identifies 119 separate breweries over time in the state.

It was the heyday for beer in Kansas. Of course, things were about to change.

From the beginning, Kansas has been as strict as states come with regard to alcohol.

The state legislature outlawed alcohol in 1881 - 38 years before nationwide Prohibition. It wasn't legal again until 1948, 15 years after the federal ban ended. It wasn't until 1987 that sale by the drink became legal here. Even today, a quarter of Kansas counties are "dry," and most towns still prohibit Sunday liquor sales.

But back in the 1880s, Kansans were ambivalent about temperance. And so, initially, the anti-alcohol movement had little effect on the Walruff Brewery, Higgins writes.

"Town wholesale liquor houses and licensed saloons operated as if there were no prohibitory laws. Walruff found state prohibition to be a minor irritant," her book records.

As the state's prohibition screws tightened, John Walruff attempted to seize a loophole in the Kansas law, which allowed alcohol in medicinal products. He announced a new brew called "Stomach Invigorator" and changed his brewery's name to "Lawrence Chemical Works."

A label for the brewery circa 1881, advertising the beer as a health tonic.

His beer would now be sold at the apothecary alongside so many other "wonder drugs" whose ads filled the newspapers of the day.

His scheme ultimately landed him in court, though, when a woman whose husband got drunk off "Stomach Invigorator" sued. Thus began years of legal trouble for Walruff - he would pay many fines, many legal fees and flee the state multiple times. But meanwhile, Walruff continued to brew beer.

His legal plight thrust Walruff to the fore of the anti-prohibition movement. He became an ardent Republican backer and an outspoken critic of temperance.

"I have fought the fanatics for six long years," Walruff wrote to the U.S. Brewers Association. "They know they cannot stop me from brewing, they have thrown every obstacle to keep me from wholesaling."

Soon the courts would indeed stop him and the rest of Kansas' breweries from making beer. Another brewer fighting Kansas' prohibition law - Salina's Peter Mugler - lost his case in the U.S. Supreme Court in late 1887. It precipitated the end of Walruff's struggle, as noted in the Topeka Capital:

"The jig is up now with Mr. Walruff, and it may not be out of place to say that John Walruff is not a villain by any means, but a good-natured, kind, industrious old German, whose pluck is only equaled by his lack of discretion."

Free State Brewery's master brewer, Steve Bradt, during a 1997 expedition in the old Walruff Brewery tunnels — the first time people had explored them since they were sealed in 1964.

These days, all that remains of Walruff's estate is the small limestone stable at the north end of Maine Street.

In 1964, Herren and Westerhouse Contractors envisioned a trailer court on the old Walruff acreage, so the rest of the brewery building was leveled and the network of tunnels below were sealed up. Presumably the stable was spared as a garage or storage, which is what one of the property's current owners, Robert Allison, initially used it for when he bought the trailer court 30 years ago.

A photograph of the back of the Walruff Brewery in the late 1880s.

"Walruff was quite a guy," Allison laughs. "There's certainly interesting history in that building. But it's really just kind of a problem now. It isn't good for anything. People break in and it just becomes a nuisance. But it's there!"

A few years ago, a drunk driver knocked a hole in the wall, but Allison hasn't thought seriously about repairing the building. Or tearing it down, for that matter.

"I'm sure there'd be a lot of commotion if it was torn down, but I just don't know what to do with things like that. It's not something people come out and look at. There's really not much to see. No one really pays any attention to it." 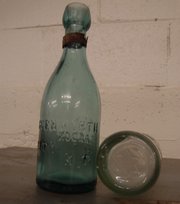 A detail of Magerl's vintage bottles. The one on the left is from a Leavenworth brewery during the Kansas Territory days (note: "Leavenworth, KT"). The one on the right is from a Kansas City brewery around the same era. The star on the bottom is the symbol for a product of an alchemist, which is what brewers were considered before advances in refrigeration and microbiology.

Walruff's legacy, on the other hand, caught the attention of one critical Kansan: Free State Brewing Co. owner Chuck Magerl.

In fact, Free State pretty much owes its existence to Walruff's story.

Around 1975, Magerl was studying in his preferred nook high in the secluded stacks of Watson Library. Sometimes when he took study breaks, he grabbed random books from the shelves to peruse. This day a 1941 KU School of Business masters thesis caught his eye, "Industrial History of a Midwest Town" by Kenneth Middleton. In it was a history of Walruff Brewery.

"Reading that made me realize, 'You know what, we've had a history of brewing here in Kansas,'" Magerl says. "It was my historical interest in breweries in Kansas, and zeroing in on Walruff, that lead me to think 'Ok, what's different - what's changed from 1870 to the 1970s.' In the '70s there were small wineries but no small breweries at that point," he says.

"Thinking through that lead me to dabble in home brewing and from there to keep track of what was slowly emerging on the west coast with small breweries like New Albion and Anchor Steam.

From there I could see a possible pathway."

Years later, with just a handful of classes left to finish his degree, Magerl walked away from KU to pursue his dream of brewing beer. First, he would have to do battle - much like Walruff - with the liquor laws of the state.

In 1987, he succeeded in his push to legalize "brew pubs," and in 1989 Free State opened the first licensed brewery in Kansas in over a century.

"In choosing the name 'Free State,' it was a way to try to engage people in recognizing our heritage here," Magerl says. "Some of it's good. Some of it's not so good."

* The rest of that sentence from Brother Epp's 1902 diary entry:

"In Munjor, we built a small combination brewery and ice-house. We felt justified in this because without beer, things do not seem to go as well, and to ship beer into the prohibition state of Kansas would arouse public notice, to say nothing of the expenditure and other difficulties."

Ha ha! Phil does it again! Nice story. I love that you could go to the brewery and hang out, watch some peacocks, play some croquet, get tanked, and shoot guns. Very Lawrence I'd say.

great article, phil. the old brewery sounds like it was an awesome place to hang out. so the tunnels are under the hospital or up by the trailer court and the shed?