Net Worth: Splicing and morphing are all the rage on Internet

Few things have burrowed under my skin lately like “The Human Centipede.”

As with last year’s “Paranormal Activity,” it’s become the movie that everyone is talking about but few have actually seen.

Dutch director Tom Six concocts a plot that involves two American women on a road trip through Germany. Car trouble deposits them at an isolated villa where they are taken captive by a retired surgeon whose specialty was separating conjoined twins. However, he has decided to involve the girls and another prisoner in his greatest experiment: permanently connecting three people via their gastric systems into a human centipede. (You can read Eric Melin's full review here.)

Trust me, unless you are really, really into horror movies, you might want to skip perusing the trailer. It really sticks with you, so to speak.

Somewhat similarly, the upcoming blockbuster “Splice,” starring Adrien Brody and Sarah Polley, is founded on the concept of scientists splicing together human and animal DNA to create a new organism. But since it’s Hollywood, the organism is obligated to “turn deadly.”

For kicks, head to the flick’s homepage and upload a front-facing photo of yourself to see the results of mixing your DNA with that of the creature.

The underlying concept of blending people together is not just limited to horror films. It’s apparently all the rage on the web, albeit in much more tame ways. 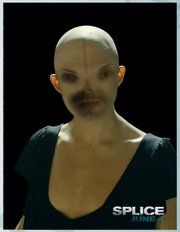 Jon Niccum splices himself with the character Dren from "Splice."

For instance, I was recently surfing when an ad caught my attention. It boasted the site Make My Baby in which you can put in a picture of you and a significant other to see what your offspring might look like. Yes, I’ve already got a “baby” (actually a 6-year-old) who appears remarkably like a blend of my wife and myself. But I thought I’d test out the veracity of the process and upload our pictures. After much digital adjusting of eye placement and chin length, the site was ready to spit out the finalized image ... to my cell phone — charges apply.

Hey ... wait a minute. This ad is nothing but a way to get you to buy something. Wow, what a concept: a website designed to actually make money.

But since I have no intention of paying $9.95 to enjoy this service — or to own a cell phone that can take pictures — I moved on to a free site.

Morph Thing bills itself as a way to intermix a stockpile of celebrity photos. So you can see what, say, a splicing of Justin Timberlake and Britney Spears might look like. Or, if you have even an ounce of self-respect, you’ll utilize the process for its humorous potential, like by fusing Mary-Kate Olsen with Gollum.

But Morph Thing also gives you the option of uploading your own picture to merge with a celebrity and see how your combined love child might look. While the concept of seeing what the coupling of myself and Scarlett Johansson might produce is pruriently intriguing, I opted to stick with the original plan.

I eventually got Morph Thing to churn out the (free) goods. Lo and behold, a combined picture of the wife and I did look somewhat like my daughter. That’s disregarding the beard, of course.

And I hate to say it, but there was something very “centipede-ish” about the photo.