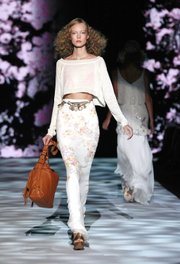 A new 1970s-style fashion muse, who means business during the day but can disco the night away, dominated the recent runway trends in the world’s fashion capitals. This photo shows the Badgley Mischka spring 2011 collection modeled during Fashion Week in New York.

You’re going to need the hair, makeup and nails to really capture the ’70s girl dominating spring trends, but you don’t have to wear them all at once.

Beauty insiders who turned runway models into Bianca Jaggers during the season’s previews say the disco-infused look has elements of mass appeal but moderation will keep it from becoming a costume.

Move just enough outside your comfort zone to update your look, they say. Some tips:

Redken’s creative consultant Guido, who is known by his first name, saw a pervasive theme of “decadent glamour,” noting inspirations from the ’70s as well as the ’20s, as he moved from New York to London, to Milan, Italy, to Paris for runway shows this cycle.

No one is expected to fully recreate the runway, which is a platform for the fashion world to send women in a particular direction, if not a specific place, he says. “You can do it in small bits. The shows are there to indicate what designers and stylists are thinking.”

He suggests teasing the hair a bit at the crown, adding spray shine or an exaggerated side part. A side ponytail or a wave of hair over one eye also capture the mood, he says.

The longer hemline, for example, looks great with some height on the head, which adds to a leaner silhouette, says Frederic Fekkai celebrity stylist Renato Campora.

If clothes are highly structured — or, conversely, very floaty — the hair should offer some contrast, Campora advises.

An easy-to-do glamour ’do is the one he used for the Marchesa models: Pull the hair into a back braid, then open up the braid with your hands. “Everyone can wear it,” he says.

The darker and smokier the eye, the more you’ll come off like Angelica Huston or Jerry Hall, but the contemporary twist is to add texture or color right in the center of the eyelid, advises Francelle Daly, national makeup artist for Nars.

At Marc Jacobs, for example, green was the dominant shadow color and there was a dark, deep red lip. To temper the eye just a little, try mixing the shadow with petroleum jelly, which will also make it easier to apply, she adds.

You could add the bright lip, too, for authenticity, but Daly says a lot of women will think that’s too severe for modern tastes. “It’s all about color again, but focus on the eye with a pale lip, or a fuchsia lip with a light eye,” she says.

MAC Cosmetics’ vice president of artistry, Gordon Espinet, came away from the shows putting an emphasis on beautiful skin.

The look is primed and refined with good skin care, lightweight concealers and foundation, and delicate powder and mineral-based formulas, but it is not too tan, according to Espinet.

Espinet says he loved seeing gold — on the skin, on the eyes or the lips — at Donna Karan.

The ’70s, bohemian style is more glamorous than her hippie predecessor, says Jan Arnold, co-founder of CND, which did the nails for Marc Jacobs, Catherine Malandrino and Elie Saab, among others.

“This is a rich boho, who wears fringe, floral and flowy,” says Arnold. “The manicure that looks best with that is not bare or sheer, it’s an opaque porcelain cream. It’s super high shine. It just looks expensive.”

To carry it off, leave nails a little longer, about one-quarter of an inch longer than the fingertip and filed into an elegant almond shape, she recommends. (Embracing a free spirit, though, this boho muse wouldn’t dream of matching her fingers and toes, Arnold observes. For the pedicure, go with fruity, playful shades.)