Human billboards are signs of the times

By By John Ewoldt | McClatchy Newspapers 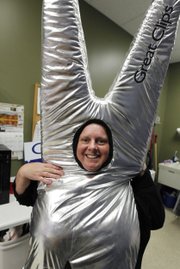 At the Great Clips hair salon, Jenny Bagwell shows her scissors outfit, which she wears about 12 hours a week to attract potential customers in Maple Grove, Minn.

To attract customers, some small businesses plant employees near their business often dressed in costume, holding a sign, which the employee shakes to attract drivers’s attention. Here, sporting a wedding dress, Briton Tomasko, 18, granddaughter of the owners of Park Diamond, tried to drum up business in Maplewood, Minn.

We’ve all seen one: a person dressed in a costume near a busy street, waving to drivers and usually holding a sign with a deal to a pizza place, hair salon or even a tax service. Many of us have probably never done much more than smile or wave back, which makes a person wonder, does this kind of advertising really work?

Dan Hendrickson of Minneapolis wondered that as he drove by the guy holding an “early bird special” sign outside Jiffy Lube on W. 7th Street in St. Paul.

“Companies seem to be pulling out all the stops to attract business,” he said. He hasn’t pulled in to Jiffy Lube — out of loyalty to his regular mechanic — but, Hendrickson said, “it makes me root for businesses that try it.”

In tough economic times, small businesses try new ways to draw in customers. Many have gone to social networking on Facebook and Twitter and coupon sites such as Groupon, but old-fashioned methods are resurfacing.

They’re human billboards, said Glenn Karwoski, managing director at Martin Williams Advertising in Minneapolis. It’s a variation on an old marketing strategy, the sandwich board. “But any way you look at it, it’s inexpensive outdoor advertising,” he said.

The past two years have been especially hard on businesses that sell luxury items such as jewelry, said Crystal Lundquist Mely, co-owner of Park Diamond in Maple Grove, Minn. To survive, she adapted. She moved to a smaller location and when city ordinances wouldn’t allow a sign in the window, she took to the streets. Or at least her grandkids did, dressed as fairies in one outing, “Wizard of Oz” characters in another and most recently, a “bride” in a wedding gown wearing a diamond as big as a golf ball, waving to cars driving by on a busy street.

“It triples my traffic when I have my grandkids helping out,” Lundquist Mely said.

Jennifer Max, the owner of a Great Clips franchise, said her business more than doubles when she has a pair of scissors near her salon — a 6-foot-tall pair of scissors worn by a woman who snips along busy Weaver Lake Road in Maple Grove. It also doesn’t hurt that the scissors sister is holding a sign saying, “Haircuts $6.99.”

If on-street marketing works so well, why aren’t more businesses doing it? Like any pursuit, not everyone is good at it. The poor schmucks with hangdog faces staring at the pavement don’t do much to attract customers. It’s the ebullient characters who strut, smile and make us laugh who pull us in.

Briton Tomasko, 18, of Brooklyn Park, Minn., doesn’t mind putting on a wedding dress and waving like a member of the royal family to potential Park Diamond customers as long as there are cars driving by. “It gets boring when there isn’t anyone to wave to,” she said.

The wavers have to be appropriate to the brand, Karwoski said. You probably won’t see a person in a robin’s-egg blue box dancing in front of the Galleria to coax big spenders into Tiffany’s.

Generally, the concept works best for a spontaneous purchase, such as an oil change or a pizza, he said.

Little Caesars on S. Snelling Avenue in St. Paul tries to have a person holding a sign every weekday from 4 to 7 p.m., when people are heading home for supper.

“It’s a great marketing tool, and it does work,” manager John Ryan said.

Most of the human signs try to have fun on the job, so it works best for a business with a sense of humor. Tax services don’t usually elicit a lot of yuks, but Liberty Tax Service is trying to change that. Every tax season, from mid-January to mid-April, at least one employee from its 39 Minnesota locations is dancing near a busy intersection, drumming up business dressed as the Statue of Liberty.

The company employs wavers, an official title, in the coldest season on the calendar. Fortunately, the turquoise foam costumes (with crown) are baggy enough to hide a coat beneath. It also helps that Liberty employees are encouraged to bring headphones.

“Dancing to the tunes not only keeps the wavers animated and attracting customers, but it also keeps them warm,” said Nina Cunningham, public relations director for Liberty Tax in Virginia Beach, Va.

The wavers are such an integral part of Liberty’s business model that auditions are held after applicants watch videos of the company’s favorite wavers. Prospects get suggestions such as saluting police officers who drive past and arm-pumping to get truck drivers to honk.

“It’s all part of building our brand,” Cunningham said.

But do people really choose a tax preparer because someone in a cute costume waves at them? Cunningham said that it’s a little like going to the dentist: “We want to take something unpleasant and make people more relaxed about it.”

What sounds like a great job for class clowns and “So You Think You Can Dance” wannabes isn’t as easy as it looks. Turnover is high, according to most small-business owners. The pay is usually minimum-wage, and most wavers don’t get commissions, despite the uptick in sales.

On the positive side, breaks are frequent and shifts rarely last more than four hours.

A big ham, Jenny Bagwell, 39, loves putting on the scissors costume for her Great Clips gig. But it was a rocky start.

“You’re not seriously going to do this, are you, Mom?” her 20-year-old son asked. “You’re going to be slushied,” he said, referring to the fate of uncool students on the TV show “Glee.”

Not to worry. Bagwell has been the recipient of people blowing kisses out the car window, found herself in the middle of admirers having their picture taken with her and has been invited to join a group of kids for trick-or-treating.

“It’s the funnest thing I’ve ever done,” she said.