Artist Janet Satz is pictured in the Signs of Life Gallery. Her show, which features paintings and photography with mixed graphic media, will continue through Nov. 27.

Perhaps, because local artist Janet Satz grew up near Chicago’s towering skyscrapers, it makes sense that much of her art focuses on the architecture of large buildings and cities. Satz, a Lawrence resident since 1989, says she’s been creating art as far back as she can remember into her childhood.

The inspiration for her work came from train rides on Chicago’s public transit and the quick glances of the scenery she caught as she gazed out the windows.

“I’d get these fragmented impressions of urban settings. That’s how I really sort of think of these pieces — as fragmented depictions of the urban landscape.”

While twisting all things metropolitan into a kaleidoscopic mishmash of angles, colors and textures, Satz says she attempts to draw the viewer into her works and involve them on a cerebral level.

“I hope when people see my art that there’s a sense of mystery and a feeling of the unknown,” she says. “I hope they’ll be fascinated and will have questions. It will make them stop, look and ask.”

Satz says the process she uses in creating her artwork has evolved over time. Her style originated from accidentally combining two of her previous pieces, seeing the juxtaposition of color and form, and then experimenting with the results using layers of drawings and prints.

“I started adding underneath it and cutting up the photograph and rearranging, and it just started that way. I just kept doing it.”

Later, she began enlarging the images and liked what the change in size added to the piece.

“I wanted to really see how far I could push this work, so I enlarged one,” Satz said. “I loved what happened when it was enlarged — it’s taken the work to a different dimension of the visual experience. It’s so different from the collages that are so small and intimate. You can almost enter into the larger pieces.” 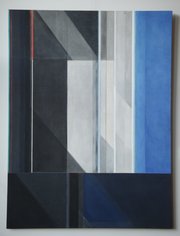 Although she says she goes out of her way to avoid being influenced by other artists, Satz says it’s inevitable that elements from other works will creep into her own.

Though many of her works involve urban settings, Satz says she has become more interested in making an environmental statement with her work over the years.

“It’s all landscapes,” she says. “It’s the opposite of the bridges and girders, the construction against the sky. It’s the showing of the interdependence of all the structures of the city. Forests are being cut down, creating environmental changes in other countries, cut down to build cities. I’m really trying to make a statement on the environment, whether it’s urban or in nature.”