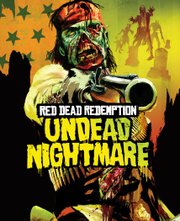 In the world of video games, there is currently a zombie invasion going on. No, seriously, it seems every game these days is adding zombies as an expansion pack or bonus content. When Undead Nightmare was announced it was hard to feel excited, that is until I found out that the pack includes a single player campaign and co-operative mode where you battle waves of enemies. If you’re going to toss zombies into your game it needs to be handled the way Red Dead Redemption handles it: with quality. Much like Grand Theft Auto IV’s add-on episodes, Undead Nightmare is in and of itself a complete campaign with a fun multiplayer mode.

You return as John Marston on your farm just around the final missions of Red Dead Redemption. Late one night, your Uncle returns home after he’s gone missing and he’s been converted into a zombie. He attacks you and your family, turning your wife and son into zombies as well, and now its up to you to find out what’s going on and if there’s a cure. Those that have yet to complete the original title will be pleased to know that Undead Nightmare has its own save and its own section of single player, so nothing in your main game will be affected. In addition, the events that pass in Undead Nightmare do not require you to have completed the main game, but it will help your understanding of Marston’s interactions with other characters. This is not a quick add-on like we saw with the free co-operative missions – Undead Nightmare has a lengthy plot that will have you traveling all across Red Dead Redemption’s map to solve the mystery of the zombie apocalypse.

Along the way you will encounter plenty of familiar faces as well as stranger missions, new types of enemies and even special horses to break in. Basically Rockstar created a completely new mini campaign that stands on its own, complete with cutscenes and new rules. As you would probably expect, zombies require headshots to die and unlike the regular game, there are no shops or areas to get ammo so it is extremely limited. This brought a whole new level of challenge when combating hordes of zombies, something you will have to do at each town before you can save and fast travel there. Additionally there are special types of zombies – Bolters move quickly along the ground and run just slightly faster than you, Bruisers can charge you and knock you to the ground (making you vulnerable to the horde) and Retchers spit glowing green goo. The missions vary from mundane fetch quests that plagued the early parts of the original to complex multi-part battle missions, which are still the highlight of this open world. Red Dead’s tongue-in-cheek humor returns, but is even more exaggerated given the zombie outbreak, making the overall tone of the quest quite humorous.

I really enjoyed Undead Nightmare. It was a refreshing rehash of everything that made Red Dead Redemption great and gave me plenty of things to do. While the main storyline could probably be completed in 4-6 hours, once you throw in all of the side quests and other things to do it wouldn’t be a stretch to expect 15 or more hours out of Undead Nightmare. I also liked the subtle changes; everything has been transformed to be undead to the point that if your horse dies, it returns the next time you whistle for it in undead form. Rockstar also threw in some fan service for those that have followed its legacy of titles, including the achievement “six years in the making,” which I dare not spoil for you. It isn’t without its faults, though, as Undead Nightmare suffers from large framerate drops at times that weren’t present in the original. I played it on the 360 with my copy of Red Dead Redemption installed on my hard drive, but I did talk to someone who played it on the PS3 and it appears the issues are the same. Additionally there is a major glitch in the Mother Superior missions that will have your console potentially freezing multiple times as you attempt to complete them. Like the framerate issues, this appeared on both 360 and PS3 versions and it can be both frustrating and scary. I had my system freeze up three times, but eventually I was able to complete the missions and I didn’t have any issues after that. While it does seem like a detrimental bug, don't let it discourage you from Undead Nightmare, because even with these problems it was well worth the playthrough and price tag.

Also included in the Undead Nightmare pack is eight new undead characters for multiplayer and a new mode: Undead Overrun. This is a co-operative mode where up to four players can battle waves of attacking zombies in a struggle to survive. It’s basically horde mode from Gears of War 2 or firefight from Halo, but as you can imagine in the world of zombie infested Red Dead it gets much more frantic quickly. This type of co-op was a lot of fun and now that the cover mechanic is all but useless, it requires you to change the way you team up because a pack of zombies can kill a player very easily. Time can get away with you quickly in this mode and I’ve probably sunk as much time in Overrun as I have completing the Undead Nightmare campaign.