Winter wellness: Try these natural remedies to stay healthy when the temperatures drop 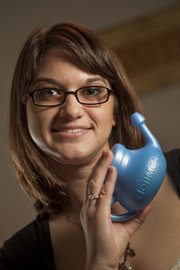 Kansas law student Kara Harms has been using a neti pot for about six months. 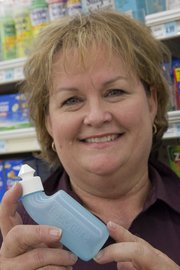 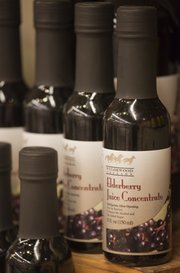 What kind of natural remedies do you use to stay healthy in the winter?

When kids are sick, mothers are always happy to help in any way they can. And when Lawrence’s Kara Harms was battling a sinus infection, her mother suggested a new remedy that also happens to be very, very old.

“My mother originally purchased one to help clear out her sinuses and cut down on drainage,” says Harms of the neti pot, which looks like a miniature tea pot and works by clearing the nasal passages with a saline solution.

Though, Harms adds, it wasn’t the most graceful of remedies, the little pot seemed to work.

“It feels very awkward at first and it caught me off guard when water starts running out the other nostril. Not something I like doing in front of people,” Harms says. “It took some getting used to it, but I think it works to clean out my sinuses pretty well.”

Madeline Finch, also of Lawrence, likes to use her pot to help her avoid illness.

“I believe in preventative medicine and will do anything I can to stay off antibiotics,” says Finch, who also uses Chinese herbs and sees an acupuncturist. “I use it with a couple of drops of grapefruit seed extract, which is considered to be a ‘natural’ antibiotic, when I have a cold or am stuffed up as a preventative to infection.”

Neti pots aren’t the only natural remedy available for folks struggling with allergies and illness this time of year, and many people are looking to those options first, says Lisa Morgan, health, beauty and cosmetics manager at the Hy-Vee at 3504 Clinton Parkway.

“Really, people are trying to go for the natural, and the zinc and trying to go more with the herbals than they are with NyQuil or whatever,” Morgan says. “They’re trying to do alternative options here.”

Those options are all over the map, from herbs to isolated vitamins and minerals like vitamin C and zinc, to foods used medicinally like honey and garlic.

And what can these natural products do for you?

• Honey and pollen: For allergy sufferers, local bee products may provide some relief, because it may help inoculate you against plants you’re allergic to. It works because the pollen from local bees is collected from local plants, just the ones that can trigger your allergies. If you ingest some bee products containing little bits of pollen from the plants to which you’re allergic, you may build up an immunity to them over time.

“It has to be from a regional source, and it has to be harvested when the allergens are up,” Kalman says. “If you’re getting pollen from the Northwest, you may or may not be allergic to those plants.”

• Neti pots and systems: Systems that allow a flush of saline solution through the nasal passages can help people with sinus infections and allergies and is a practice that dates back thousands of years, says Dr. Farhang Khosh, a naturopathic doctor with Natural Medical Care, 4935 Research Park Way. He says though, that one must be careful to use the product properly and also avoid using iodized salt with the products.

“Experts recommend that you make sure that you are using it in the proper way, because you can, let’s say you have an infection in your sinuses, you can push that through into your ear cavity, because your sinuses, your ears, these are all interrelated,” Khosh says. “You don’t want to do it too much because you’ll develop some resistance to it, and also too much salt can make the nasal passages really more irritated.”

• Herbals: Garlic and echinacea are two of the more popular herbs that are said to boost a person’s immune system, but there are numerous others too that are useful for those who are trying to avoid illness and mask the symptoms of a current illness, says Kalman, including andographis, stinging nettle and elderberry. Though, she says, because amounts and claims aren’t regulated by the FDA, the user is responsible for their own research before using any herbs.

“A lot of people come here and they are like, ‘Just tell me what to do,’ and it’s like, ‘I can’t,’” Kalman says. “You have to talk to your doctor talk to a naturopath.”

• Certain vitamins and minerals: Lozenges containing zinc became all the rage in the 1990s when Cold-EZEE first came onto the market, promising to shorten the span of rhinovirus-based illnesses. According to the company, the reasoning is this: Rhinoviruses have a negative molecular charge, and because zinc has a positive molecular charge, the zinc lozenges are magnetic to rhinoviruses.

Also popular among people feeling ill are high doses of vitamin C, which are included in the popular remedies Emergen-C and Airborne. There’s also another high-C preventative making the rounds: elderberry.

“We have the elderberry concentrate, it’s very popular for allergies and asthma,” says Jan Hornberger, Health Market manager at the Clinton Parkway Hy-Vee.

What’s important to note is that these health preparations are meant to be used before you get sick, and though these natural remedies aren’t regulated by the FDA, they can have some serious consequences if used improperly or in combination with other drugs.

“We do need to know any over-the-counter products they are taking,” says Pat Hubbell of Sigler Pharmacy, 4951 W. 18th St. “Specifically, herbals because there are some drug interactions that we do need to be aware of and that we need to make the patient aware of so they don’t harm themselves. There are not a lot of them, but there are a few that are fairly potential and we have to keep track of them.”