An eye for expansion: Bar and restaurant owners bring a little bit of Lawrence out of town

Rick Renfro, owner of Johnny's at 401 N. Second St. in North Lawrence. Since buying the bar in 1978, Renfro and his partners have expanded to eight locations.

Robert Krause, left, and business partner Simon Bates own both The Burger Stand at The Casbah, 803 Mass. and its neighboring restaurant Esquina. They are preparing to open their second Burger Stand location in Topeka. 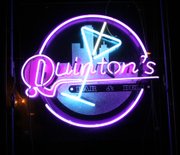 Quinton's, 615 Mass., is has also expanded its reach into Columbia, Mo., and three other locations with another one in the works.

Any Lawrencian headed out of the Sprint Center after a game or concert is likely to meet a friendly face just steps outside the venue’s doors: John Wilson.

Don’t know John? Sure you do.

He’s the Johnny of Johnny’s Tavern, and just as he is at the two locations in Lawrence, Johnny is hanging over the heads of potential patrons in Kansas City’s Power & Light District with a knowing look, hat and a tie.

The Power & Light location is Johnny’s first outside of Kansas and its eighth store overall, making the taverns currently the largest restaurant chain to grow out of Lawrence.

But it’s not the only Lawrence landmark to have expanded outside the area. Henry T’s, Ingredient, Quinton’s, The Sandbar, El Mezcal and Papa Keno’s are some of Lawrence’s most successful expanders, bringing a bit of Lawrence to places as far-flung as Omaha or as close as Ottawa.

Yes, bits of Lawrence are starting to show up everywhere.

And in the year to come, there may just be more Lawrence favorites headed into other markets. Quinton's, which already has five locations, might be getting another location in Kansas City says owner and founder Steve Gaudreau. Gaudreau also has paperwork in place to possibly franchise out Dempsey’s Pub to a location in Wichita. Also in the burger world, the owners of The Burger Stand at The Casbah have signed a lease to put a Burger Stand near Washburn University in Topeka.

So, how have these establishments been able to bring a bit of Lawrence to places that aren’t even in spitting distance? When it comes down to it, it’s all about the right formula.

Gaudreau says that soon after he opened in Lawrence in 1991, he realized he must have a good basic business plan because people were asking him about franchise opportunities. He now has franchises in Kansas, Missouri and Iowa.

“I tried to make Quinton’s a pretty dummy-proof idea,” Gaudreau says. “I don’t need to hire a chef, it’s all pretty easily replicated.

“It’s just a very loose structure, but it’s got a good foundation, so it works.”

Gaudreau has stuck to the franchise model for Quinton’s and only has ownership in the Lawrence store. But after successful franchising, he still wanted to do more, so he got with two old buddies and created a chain called Bison Witches with four stores in Arizona, Oklahoma and Nebraska. But, he says, he has no plans to expand that chain further. As for Quinton’s, he’d like it to keep expanding, but not at a break-neck pace. Though he doesn’t have ownership in the store’s franchises, he’d like them to be successful and to be close enough that visiting them is manageable. Case in point: He says he recently turned down a woman who wanted to open up a Quinton’s in San Jose, Calif.

“I would love for it to grow, but I’m going to grow slow. There’s a lot of places that take off fast and they sell them to anybody that comes up with the money and their structures are not very beneficial to the franchisee,” says Gaudreau, who has his franchises set up so that only stores making a certain amount of money have to pay him monthly franchise costs. “I want them to be successful, I’d rather get the money from five stores that are successful than 100 stores and have them go down the toilet five years later.”

Rapid expansion has been the name of the game for Ingredient, and the partners who own the Lawrence store couldn’t be happier. The “gourmet-fast casual restaurant” opened in 2007 with every intention of expanding says partner Nick Wysong, but he says even the owners didn’t expect things to go so fast. In three years, they’ve added six new locations in Kansas, Missouri and Nebraska and are about to open one in Fort Collins, Colo.

“I think our intention and our goals were always set on that (expansion),” Wysong says. “Did we think we would be as far as we are now? I don’t know, but we’re there.”

Meanwhile, Johnny’s is right down the middle of the two models, having started off expansion slowly before doubling the number of stores in the past eight years, including two that opened last year. Since buying the bar with Doug Hassig in 1978, Renfro and Hassig have continually brought in partners to help them expand, to the point, Renfro says, that each store now basically has its own partner/general manager on site. He says the partners meet every couple of weeks to get on the same page, and the biggest struggle for the company is how to make each location a Johnny’s but a Johnny’s that fits the specific location.

“That’s the problem with the franchise/second location is getting it to be autonomous enough that it can stand on it’s own and do it’s own thing and be,” Renfro says. “A lot of the discussions that we have are about how we can be unique but also be general, too.”

Renfro says the partners have tried to do that by having slightly different menus based on area tastes and also the particular restaurant set up. For example, he says he often gets customers wondering why there aren’t certain salads on the menu at Johnny’s original location, 401 N. Second St., a kink caused by the lack of fridge space.

Quirks of the business

Other quirks also happen in expansion, some bigger than a missing salad or two. Getting things up and running in another town entirely can get dicey, even if it’s nearby. This is exactly the situation in which Robert Krause and The Burger Stand find themselves.

Krause says restaurant’s foray into the world of expansion isn’t totally rock solid, despite the Lawrence store’s success. He and his partners — wife Molly and friends Simon and Codi Bates — signed a lease agreement Nov. 1 for about 5,000 square feet of retail space in Topeka’s College Hill development. But Krause says that while he’d like to open the new location early in 2011, he’s not 100 percent sure it will happen.

“We are going to, and hopefully in that location, open our second Burger Stand,” Krause says. “We’re doing it. We want to do it. And we want to do it there. And economically, it’s a good deal for us, but until the financing is in place, things could still go wrong.”

Krause says he’d still like to open a Burger Stand in Topeka, regardless of if it ends up being in College Hill or not. After that, he says the restaurant will probably look south for it’s next opportunity — as a potential partner has been hinting at wanting to bring the restaurant to Tulsa, Okla.

As for the group’s other business, the popular taqueria Esquina, Krause says he’s not sure it’s something that could be done in another location. At issue? The fresh nature of the eatery’s signature dishes.

“The formula for Esquina requires more hands-on, specific people,” Krause says. “It’s healthy, it’s spicy, it’s fresh and I feel good about eating that food, but it’s a lot more difficult. The Burger Stand concept seems more likely. If you want to focus on expanding a concept, it would be that.