Cider house rules: The seasonal apple delight is more than just a drink, it's a kitchen all-star

Hot apple cider is one of the popular comfort drinks people turn to as temperatures drop.

Apple cider is one of the joys of autumn, right up there with turning leaves and pumpkin-flavored anything.

That said, there are more ways to enjoy the fall drink than just hot or cold.

“We’ve always used it at Thanksgiving. We baste our turkeys with cider and it really changes the gravy, as you might imagine, the drippings,” says Shelly Schierman, co-owner of Louisburg Cider Mill with husband Tom. “And my husband’s pretty famous for his turkey gravy at Thanksgiving and I think it’s because of the cider, it’s his little secret.”

In fact, cider works well in any place you’d normally put water in baking or cooking, especially when working with other seasonal items, says Nancy O’Connor, the director of education and outreach at The Community Mercantile, 901 S. Iowa.

“If you’re sautéing vegetables but they need a little liquid, instead of adding water to steam them, you can add apple cider and it just imparts a little sweetness,” says O’Connor, who recommends combining cider with squash, pears, sweet potatoes, and, yes, more fall apples, in any recipe you’d use water. “I use it a lot this time a year if I have cider in the refrigerator anyway, especially in recipes that use winter squash, it just brings out the sweetness.”

That said, cooking that way is a trick only to use with seasonal apple cider, not apple juice says O’Connor.

“When you use that clear, processed apple juice, it’s so generic that mostly it tastes sweet, rather than flavorful,” O’Connor says. “You could substitute it, but it wouldn’t have that effect of that nice, complex, deep apple taste that you get from cider.”

Mix cheese and flour in a bowl. Combine apple cider and lemon juice in fondue pot. Bring to very low simmer; do not let it boil. Add a handful of cheese and stir constantly until the cheese is fully melted. Continue to add one handful of cheese, stirring constantly and melting the cheese fully before adding the next handful. After all the cheese is fully melted, stir in pepper. Serve fondue with a basket of cubed bread for dipping.

Bake an additional 30 minutes or until meat is cooked through. 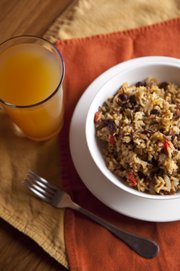 To make the brown rice: In a large ovenproof saucepan, sauté the onions, shallots, and celery in the reserved cranberry liquid and butter until the onions are translucent. Combine with the brown rice and stock. Bring the liquid to a boil and cover the pot tightly. Add the red bell pepper and cook in a 350-degree oven until the rice is tender and has absorbed all the liquid, about 40 minutes.

To prepare the wild rice, bring the apple cider, stock and wild rice to a boil in a medium sauce pan. Cover the pot tightly, and cook in a 350-degree oven until the rice is tender and has absorbed all the liquid, about 90 minutes.

Combine both rices and the plumped cranberries.

Preheat oven to 400 degrees. Grease a 9x13-inch baking dish with 1 tablespoon butter, then arrange turnips in dish in a single layer. Combine remaining 2 tablespoons butter, cider, sugar, salt and pepper in a small pot and cook over medium heat until melted and well combined. Pour this mixture evenly over turnips.

Cover dish with foil and bake for 20 minutes. Stir turnips and continue to bake, uncovered, stirring occasionally, until fork tender and liquid has reduced, 20 to 30 minutes more. Sprinkle with parsley and serve.

Preheat oven to 350 degrees. In food processor or mixer, combine butter and sugar briefly, just until it forms into a ball. Add eggs, heavy cream, cinnamon, nutmeg, vanilla, and Calvados. Process until blended. Lightly butter a 9x13 baking dish. Break up the doughnuts into 1-inch pieces and layer in the pan. Scatter the raisins over the top. Pour the egg mixture over the doughnuts; soak for 5-10 minutes. You may need to push the doughnut pieces down during this time to ensure even coverage by the egg mixture. Cover with foil and bake for 35-40 minutes. Remove foil and bake for additional 10 minutes to brown the top. The doughnut bread pudding is done when the custard is set but still soft.

Heat the cream, vanilla and sugar in a saucepan over high heat, whisking, for 3 minutes. Dissolve the cornstarch in the bourbon. When bubbles form around the edges of the cream, whisk in the bourbon mixture. As the cream boils up, remove the pan from the heat and continue whisking vigorously until thoroughly blended and slightly thickened. Place over low heat for 1 minute. (This is not a thick cream sauce, it is meant to be fairly thin.)

Beat the cream with an electric mixer until soft peaks form. Add the sugar cinnamon and nutmeg. Continue to beat mixture until it forms stiff peaks.

To serve: Cut the pudding into 3x3-inch pieces. Place in center of serving plate. Spoon the bourbon sauce over the pudding. Top with spiced cream garnish with a sprig of fresh mint. Serves 8 to 10.

I LOVE Louisburg Cider!!! Near the end of cider season, I stockpile it, so I can enjoy it year-round. But as much as I love their cider, I am an even bigger fan of cinnamon. Whenever I open a jug of cider, I pour it into a crockpot, toss in a few cinnamon sticks and a teaball enclosing a few cloves & several allspice berries. Then I set the crockpot on low & leave it to steep overnight. One of my favorite ways to use my spiced cider in a recipe (if you can call it that) is to use my spiced cider in place of water when making oatmeal. It makes a boring breakfast cereal pretty darn tasty.

That oatmeal idea is a great one, Nokmis!