Slice of Life: A Passion for Africa 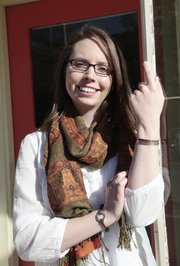 Jill Dryden, is the volunteer outreach coordinator for the Elias Fund. Dryden enjoys wearing bracelets. Two contain the African phrase "Ndak aslmba kana ma kasim bawo," which in English means "I am strong if you are strong".

A sea-shell bracelet purchased as a young teen in her native Texas, a random lecture at Kansas University, and a spontaneous response to an e-mail birthed Jill Dryden’s love affair with Africa.

She’ll spend Christmas and New Year’s traveling in Tanzania, Malawi, Zimbabwe and South Africa as part of her volunteer role as outreach coordinator for the Elias Fund.

“During a family vacation in Galveston we visited an African goods store owned by a Ghanaian who talked enthusiastically about Ghana’s beauty,” she explains. “I dreamed of going there one day and bought a cheap, silly, sea-shell bracelet to remind me of my plan.”

“I attended an elective class about violence in third-world countries my eyes were opened to different cultures and lifestyles,” she says. “I wanted to learn more and understand why people did things differently. I changed my major to anthropology and was thrilled to get to Ghana on a study trip with seven other students and two professors.”

Her sea-shell bracelet broke when she arrived in Ghana. It had served its purpose.

“The lecturers at the University of Ghana talked with such passion about their country I wanted to stay and learn everything I could,” she says.

She was struck by Ghana’s extremes of wealth and dire poverty and wished she could do something to help.

Her chance came after graduating from KU in 2009 with a BA in anthropology. While surfing the net for African service organizations, she discovered the Elias Fund.

“It’s an organization started by brothers Eric and Scott Byington to engage U.S. youth in spreading hope and opportunity in Zimbabwe through indigenous empowerment to help alleviate poverty from the bottom up,” she explains.

“When reading website updates I saw a request for someone to help organize a benefit for a Zimbabwean band traveling through the United States. I thought, why not? I sent off an e-mail and volunteered.”

The band, accompanied by Eric Byington, played in Lawrence and stayed in Dryden’s apartment.

“It was so amazing to see EFs co-founder standing there in my small kitchen,” she explains.

“I was deeply moved to realize Eric’s passion and efforts helped start this incredible movement that’s helping many Zimbabwean’s escape poverty and gain access to an education they wouldn’t otherwise have.”

“Part of my role involves spreading word about the Fund, educating others about Zimbabwe’s current situation, and helping others organize fundraising events,” she says.

During her upcoming trip she’ll spend time with recent KU graduate friends serving in the Peace Corps, visit with EF partners in Chiredzi and Kadoma, and work with volunteers, students and faculty at a school for Zimbabwean refugees.

“I’ll gather first-hand information from the people we are working with in Africa,” says Dryden.

“Hopefully I’ll be able to share my experiences with others and inspire more people to become involved in empowering Africa’s poor.”