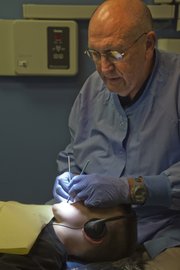 A young patient wears headphones to listen to a CD while Dr. Robert Jacobs does a final check on his teeth.

Do you have a child who struggles going to the dentist? Freaks out in the dental chair? You might consider taking your child to a specialist.

Pedodontists, commonly known as pediatric dentists, are the pediatricians of the dentistry world. They spend up to three years of specialty training after completing dental school and only treat children.

Dr. Robert Jacobs opened his Lawrence pediatric dental practice in 1975 and has treated patients from several generations in some families.

“I went to him, and so did my three kids,” says Barb Wolf of Lawrence. “He’s patient with those kids who are nervous. My kids felt a little more relaxed when he would let them listen to their favorite songs. He is a great dentist.”

“You should brush your child’s teeth when the teeth first erupt — around 6-9 months,” Jacobs says. “You want to get bacterial plaque off the teeth twice a day with either a washcloth or cotton swab. Water is fine, or a nonfluoride toothpaste. We don’t want children swallowing fluoride.”

He adds, “Some studies say white spots on permanent teeth might be linked to kids swallowing too much fluoride. When the child can spit out the toothpaste is when you can switch to fluoride toothpaste. Most kids learn to spit out toothpaste by 4 years.”

He also suggests using a small amount of toothpaste — smaller than the size of a pea.

Jacobs says the new preloaded flossers are easier for parents to use.

“After kids have dinner where they’ve had stringy food, it’s a good idea to floss even young children’s teeth,” he says.

When kids are 4 or 5, they should be able to use flossers; however, children under 8 should only floss their teeth with parental supervision.

“If flossing is done incorrectly, damage to their gums can occur,” Jacobs says.

First visit to the dentist

“The American Academy of Pediatrics and the American Dental Association recommend one or before the child is one,” says Dr. Jacobs. “Children need to have a dental home by the time they are 1 or 2, just in case there is trauma to the teeth or mouth.”

Dr. Jacobs says by the age of 3, children need to be seen twice a year.

Kelli Henderson, a pediatric dentist at Growing Smiles Pediatric Dentistry in Lawrence, opened her practice in 2007.

Molly Thomas, mom of two from Lawrence, takes her children to Dr. Henderson.

“I appreciate their atmosphere for kids,” Thomas says. “The staff goes out of their way to make them comfortable, by showing them the instruments first and explaining what they’ll be doing beforehand.”

“Plus, video games, TVs over each chair and cool prizes make it a fun environment to come to,” says Henderson. “We do fun events in the office, like our Halloween Candy Buyback on Nov. 3, where kids can come and donate candy to our soldiers overseas and enter to win cool prizes like a Xbox 360.”

Natal teeth, which erupt prior to or shortly after birth, can be shocking to parents. Henderson receives calls on this condition.

“Improper cleaning of mouth and bottle/nursing habits that lead to high incidence of decay (are reported),” she says.

“Baby Bottle Caries” (cavities) can occur when milk, formula or juice are left on the teeth overnight. It is imperative to clean baby’s teeth after that last bedtime snack.

“In my experience, I would rather see a child use a pacifier than suck fingers or thumb,” Jacobs says. “It’s easier to give up a pacifier than the thumb. The child should break these habits before permanent teeth erupt.”

Fatigue and anxiety are the two main reasons for children being more oral. Helping the child to lessen the anxiety or fatigue and praising them for refraining from the behavior is recommended by the American Academy of Pediatric Dentistry.

“Reward systems for stopping sucking the thumb are most successful,” adds Jacobs. “Spicy stuff applied to the thumb doesn’t work.”

“Improper hygiene and (poor) snacking and diet habits are high risk for tooth decay,” Henderson says of this age group.

Thumb-sucking or other habits which alter proper alignment of permanent teeth are common. Also, sports-related trauma can occur.

Adolescents have more of a tendency to overdo it with soda, sports drinks, candy and chewing gum. These have high sugar content and are acidic, which can increase risk of cavities.

Both Henderson and Jacobs refer their patients to a general dentist when the permanent teeth are in place.

“When their behavior and maturity allow them to feel comfortable in a more adult oriented setting (they refer them on),” Henderson says. “This age varies with each patient, but it’s usually in the teenage years.”