KU students backpacking in the evergreen forests of Anamalai-Perambikulam Tiger Reserve, on the border of Kerala and Tamil Nadu. 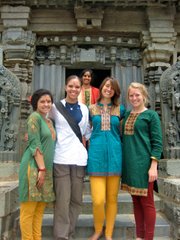 Kansas University students dressed in their Indian clothes of kurta (shirt) with bindi (dot on forehead) at the ancient temple at Somanathapura, near Mysore in Karnataka, include, from left, Monica Melhem, Brandy Fogg, lecturer Geeta Tiwari, Rhea Richardson and Hayley Mallen.

A picture of the KU India study abroad group at a viewpoint in MM Hills, in Karnataka, in 2010. Kansas University ranks third among its current Big 12 Conference peers in the number of students studying abroad, according to a report to be released today.

The view from a safari bus in Bandipur Tiger Reserve, where KU study abroad students encountered this elephant herd within about 25 feet.

Total immersion is often the hallmark of a college study abroad experience. Usually, that means students live and learn in another country and another language to gain a unique and intense educational experience.

But for 11 Kansas University students this summer, total immersion meant something even more extreme.

The 11 were environmental studies students chosen to spend six weeks in the forests of India, where they were constantly in the classroom, even if that meant the tent in the middle of the jungle.

“It wasn’t like a program where we were just going to school every day, we were learning outside and we were learning hands-on,” says Hayley Mallen, a KU junior. “I can’t really compare it because I’ve never done another study abroad, but I just feel like it was a little bit more, I don’t know, unique — more personal, maybe.”

The trip was organized by Geeta Tiwari, a KU lecturer in Hindi who grew up in India and studied wildlife biology there before moving to the United States. Tiwari had had the idea of a study abroad program in the back of her brain for a while and eventually took her plan to Chris Brown, head of the university’s environmental studies program. Brown liked the idea, and Tiwari spent a few weeks in India last year scouting locations and making contacts. In the spring, she interviewed interested students with the goal of finding ones who wouldn’t wilt in the wilderness with just a backpack’s worth of necessities. To do that, she told them about her experiences in India’s forests — no running water, rodents nibbling on exposed skin, waking up to lions so close you could spit on their furry manes.

“Those are my real experiences that I was telling them,” Tiwari says. “Really, I wanted tough kids. I didn’t need to baby anybody in the time restriction I was in.”

Deepak Surampalli had been to India before with his family, but the KU senior says the trip was nothing like the five other trips he’d taken to the country and was definitely not what he thought it was going to be.

“We literally lived in the forest for three weeks. Like, we were in the forest all the time. I didn’t expect that, I thought we would be going to places, checking stuff out, but then going back to a dorm or something,” he says. “But no, we were out in the wilderness.”

And the students got what their money’s worth: a hands-on education that took concepts from textbooks to reality.

“It’s very hands-on because we’d learn about, let’s say, a tree, like a ficus tree or something, we’d learn about it and we’d just turn and there it’d be,” Surampalli says. “It’s better than reading just about it or seeing a picture of it. I feel like I learned more doing field ecology hands-on in India than I probably would have here.”

Even Tiwari was surprised by the knowledge the students gained.

“They got to see forests of all kinds, from dry deciduous to moist to deciduous to wet deciduous, wet evergreen to high-altitude green to high-altitude grass lands,” Tiwari says. “It was really incredible, and I was amazed at some of these students who were already environmental studies majors students and they had done several courses on ecology. Many of them said to me, ‘I had no idea what the word “forest” meant before I went on this trip. Like it was just this idea in my head and now I know a forest, I know actually what it means to have a different kind of forest.’”

Tiwari says that the program will be back in the summer of 2012. The summer off allows her to use next summer as a chance to create a different study abroad experience: a cultural dance trip to India. In addition to those two study-abroad trips, Tiwari hopes to design one for those students in her Hindi-language class at KU. The big-picture goal, she says, is to give students a chance to really study the nation and maybe even major in Indian studies at KU. But, for now, Tiwari is focusing on making next summer’s trip a reality so that other amazing experiences can happen.

“A lot of those things that the students saw and acquired and learned and realized were the driving forces behind my creating this, so it was very satisfying,” Tiwari says. “At times it was very frustrating in India, but when I finally started to get to read their (papers) and hang out with them by the end of the trip and realize all that they had gained, it was and still is a very, very satisfying experience for me and for everybody.”