Behind the Lens: The curse of the shadow(er)

A wagon wheel sits in a low-water area of the Kaw River. 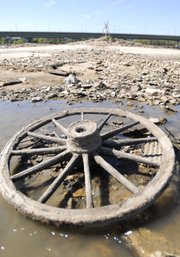 A wagon wheel sits in a low-water area of the Kaw River.

Lawrence resident Luke Stone examines a wagon wheel he unearthed from a low point in the Kansas River. Stone said he and several friends discovered the wheel and several pieces of what appeared to be an old wagon.

Whenever I get news that I will have a job shadower for the day, a little part of me sighs with uneasiness. Don't get me wrong, the shadowers themselves are always friendly, love to talk shop and bring great enthusiasm with them whenever they enter the News Center.

The problem is, when these bright-eyed and smiling people come in, they somehow manage to leave the door ajar long enough for a cold-air curse to swoop in right behind them and hover over my day. Assignments start falling through, sources won't return my calls, and crushing boredom and hopelessness set in. When all else fails I just drive around aimlessly looking for feature photographs that don't materialize while trying to convince him or her that my job and their potential future career is still interesting.

On Thursday, I met up with Chris Neal, a Kansas University journalism student from Wichita, who was waiting for me inside the lobby of the News Center a little after 9:30 a.m. I'd just finished an assignment at Broken Arrow School and was already regretting that my schedule was looking pretty light from then on out. Typical, I figured. However, instead of sitting on our bums, I thought we should just get right out, hop in the car and go on a photo hunt.

While zig-zagging the streets of east Lawrence we found nothing. Down Massachusetts, nothing. Kentucky and Vermont, squat. Finally, we decided to try our luck in north Lawrence.

After crossing the bridge, Chris and I noticed one man do a handstand in the middle of the sidewalk next to the levee. Another man was carrying a pinhole camera on a tripod toward the dam. Surely we've stumbled upon a rich land of visual stimuli, I thought.

As we walked toward the man doing the handstand he crossed back over the street, grabbed his bike and rode away. The other with the pinhole camera was interesting conversation, but we didn't manage to pull a photo out of it. Shucks, I thought, until Chris and I looked out over the river and saw the silhouette of what we later figured out to be Luke Stone. He was digging in an island of sand left in the middle of the river because of the low water level.

Curious, we stayed on him for a little while and I pointed out the contrast between the silhouette of the figure and the light reflecting off the water. I began to compose and shoot photos with contrasting tones and shapes of the water, sand and the figure in mind. Regardless of what he was doing, it looked interesting, I thought. Then, from within the sand, we saw Luke Stone unearth a wagon wheel. Either me or Chris, and I can't remember which, might have let go of an expletive upon seeing the wheel.

Stone left the wheel and began walking over the sand and wading through the river back to the banks. We met him on the levee and he told us how he and several friends discovered parts of the wagon on Wednesday and also that he wanted to return to try to dig up more. Stone explained with a degree of excitement that he believed that an old wagon was buried over there in addition to the wheel and that it appeared authentic, but was too heavy to get out of the river. I jotted down his name and number and told him we'd be in touch.

Back at the office I started picturing in my head some scenario from however long ago of a husband and wife arguing because the wagon got stuck in the mud while trying to cross the river. After talking with some of the other staff photographers it was decided that we should get a closer look. So I got my swimming trunks on.

I started off in the water with my camera in a plastic bag to keep it protected. At this point I didn't care quite so much if the wheel was authentic or pulled off the wall of a Cracker Barrel. Chris, who was shooting photos of me slogging through the river, appeared to be having a good time.