By By Emily Mulligan | Special to the Journal-World

Gary Confer, who oversees custodial operations of Fraser Hall, checks a flag atop the building. 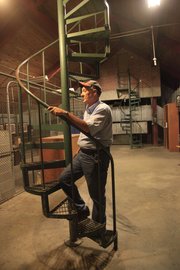 Gary Confer, who oversees custodial operations of Fraser Hall, enters a cupola via a spiral staircase on the top floor.

Gary Confer, who oversees custodial operations of Fraser Hall, hoists the flag from the room connecting the two flag pole cupolas at the top of Fraser Hall.

Ed Kiernan, a 16-year member of the flag crew for Facilities Operations, keeps in communication from the ground level.

The Kansas University flag team is focused on its flags nearly every minute the team is on campus — and even sometimes when members are miles away.

But this flag team never marches for the crowd at a football game.

The team is the behind-the-scenes crew that spends each day caring for the flags that fly atop Fraser Hall, one of the most visible landmarks in Kansas. The 8-foot by 12-foot American flag and KU flag that perch on the building’s cupolas mark one of the highest points for miles — a position that, in ever-changing Kansas weather, has its challenges.

“We use what are considered all-weather flags that can be flown in snow, rain and sleet. But when we have that weather, it’s usually windy,” says Ed Kiernan, a 16-year member of the flag crew for Facilities Operations.

Wind is the flags’ worst enemy and the reason the flag crew must pay such close attention to the flags. Even the sturdiest flags can deteriorate quickly in strong winds.

“If we step outside and we hear the flags snapping, or if we feel wind, we start looking at the flags,” says Leon Garcia, a supervisor in Facilities Operations and 30-year member of the flag crew. “If we leave them up in the wind, then they will fray. We try and fly them as long as we can, because people want to see them.”

Once the wind speed on campus reaches around 15 mph, someone from the team heads to the top of Fraser Hall to bring the flags inside.

And, as the crew learned last August, the flagpoles are not immune to weather either. After a storm with 50- to 60-mph wind gusts, a maintenance employee noticed one of the poles was leaning. The weld on the pole had snapped in the storm, the first time one of the Fraser flag poles had been damaged in 50 years of flying flags. It was repaired and back in service in less than a week.

Gary Confer, who oversees custodial operations of Fraser Hall, and has worked with the flags for four years, regularly climbs the spiral staircases in the cupolas to stand on a grate and lower the flags through a trap door on the top of Fraser Hall. He has experienced the wrath of the Kansas weather up close and personal, sometimes having to untangle the flags from the trap door by hand.

“If it’s 15 miles per hour on the ground, it’s always higher wind up another eight stories,” Confer says. “There is nothing like pulling the flags down when there is a lightning storm going on and the whole building is rumbling. It’s hard to get them down when the wind is blowing, and in the winter, the ropes freeze.”

Aside from the weather, the flag team is responsible for lowering flags to half-staff when the governor orders them and for replacing the KU flag with the “special K” flag for all football, men’s basketball and women’s basketball home games, and commencement.

The crew must adhere strictly to flag etiquette, something members take very seriously.

“That is not just a flag, it’s a symbol of our country; and the KU flag embodies the school,” Garcia says. “You have to treat them with reverence and respect.”

“I’m a vet, and I find it to be an honor. I try to keep them all looking as good as possible,” Confer says.

Kiernan is in charge of maintaining an inventory of flags, as well as having frayed flags repaired. He works with the Veterans of Foreign Wars to dispose of flags that are beyond repair. He also tracks the governor’s orders about flying flags at half-staff and compiles a schedule for the “special K” game-day flag.

The crew members each have many responsibilities other than the Fraser Hall flags, but they keep a constant eye to the sky just in case the flags demand attention. They receive regular phone calls from veterans and community members, with compliments and questions about the flags.

“You really don’t realize how much of a focal point they are for the surrounding county,” Garcia says.