Certified trainer Jeanette Wisdom works with "Smudge," a one-year-old greyhound mix that she refers as a "settled dog" at the Lawrence Humane Society. Smudge has been at the shelter since being a puppy and Wisdom feels he will be ready for adoption any day.. 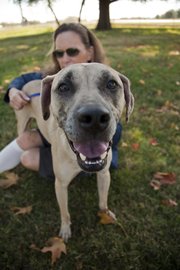 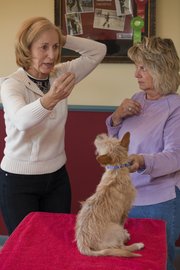 Nanette Dittrick, left, shows Cindy Well, Lawrence, how to keep treats out front of her dog's face while maintaining control on the back leash of her dog, Moxie. Dittrick, owner of Puppy Love Dog Training, is helping train the dog get ready for a dog show.

Certified trainer Jeanette Wisdom works with "Smudge," a one-year-old greyhound mix that she refers as a "settled dog" at the Lawrence Humane Society.. 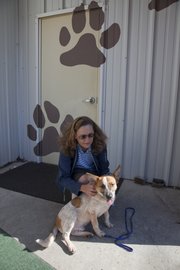 Do you have any pets that exhibit strange behavior traits?

Lawrence resident Dianne Ensminger’s dog, Baxter, is a bit of a head case.

“He’ll take two different bones and position them throughout the living room and bedroom, so he always knows where they are,” she says. “Sometimes, he moves them as many as six times a night. He won’t chew them. He just needs to be able to see them. It’s just weird.”

“Dogs need chew items, but they should have only one at a time,” she says. “Owners should make it like Christmastime when you’re going to present it to them. The same thing with toys. People just leave all this stuff out for the dogs and they’ll either totally ignore them, or they’ll start to guard it or move it around all the time.”

Ensminger admits that her Maltese-poodle mix does have a surplus of goodies around the house.

“Baxter’s got two bones, a Kong ball, a regular ball and a pink pig that’s almost as big as he is. He takes that thing wherever he goes. He won’t leave the house without that pink pig,” she says.

“That’s too much stuff,” Dittrick says. “This is not what happens in the real world of dogs. They’re very close to the surface of being a wild dog scavenging in the dump. They’re not used to having all that stuff. Leave one thing out for them and they don’t have to worry about where all their stuff is.”

Jeanette Wisdom, a dog trainer and regular volunteer at the Lawrence Humane Society, says dog eccentricities are usually caused by a combination of three factors.

“I always say breed, then temperament, then behavior. And the breed specifics dictate the temperament and the behavior,” she says.

Hunting breeds like cocker spaniels and basset hounds, for instance, will sometimes need to “hunt” their food, even if their chow is served like clockwork in a silver bowl on the kitchen floor.

“It might be right in front of them, but they’re thinking, ‘I need to hunt,’” says Wisdom. “So, they have to go and they hide it — maneuver it around or push it under chair — and then it’s like, ‘Oh, I found it. Yay!’ They’re using a predatory behavior to do the hunting because that’s their job, to use their nose.”

Dittrick says many strange eating behaviors are caused by the habits of the humans doing the feeding.

“A lot of it has to do with people being too busy, so they’ll fill up the bowl and leave it down for the dog,” she says. “The dog will finish and, when it’s time for the next meal, the owners will get the food bowl, pick it up, fill it, then put it back down. It doesn’t seem like much of a leap for us, but if a bowl is down all the time, the dog will think the bowl is producing the food, not the owner.”

A better plan, according to Dittrick, is to keep the bowl on the counter, then place it on the floor only at mealtimes, removing the bowl when the dog walks away from it.

“They need to see that the bowl comes directly from you and that it’s maintained by you,” Dittrick says.

Suzanne Hicks of Lawrence says her shepherd mix, Florence, is afraid to touch a certain runner in her hallway.

“She jumps over it because the rug accidentally slipped once when she was on it,” Hicks says. “Every once in a while, she’ll jump up and run out of the room if she is slightly startled.”

When dogs show fear of a certain household item or place, Dittrick says it’s time to break out the big guns.

“You have to open the restaurant. In fact, the dessert bar is the best idea,” she says.

“You can sit on the runner with the treat, and if the dog still doesn’t want to come up, then you find a point below the dog’s threshold where he’ll say, ‘OK, I can come that close to the runner.’ Do that several times, then move a little bit closer, then closer. Eventually, you can even feed the dog his meal on the runner for a couple times. They’ll get over stuff very easily, if you keep working below threshold, and don’t go too far, too fast.”

Wisdom says many so-called problems in dogs are due to owners’ misplaced expectations.

“Everybody always thinks of a dog as a pack animal. But, not all dogs are social. Labs and goldens are very social. That’s why they jump fences, because if somebody leaves them out in the yard, they’re going to go find somebody to go see.

“Chows, on the other hand, aren’t social,” Wisdom says. “Why do they bark at people and act aggressively? Because they’re thinking, ‘I don’t know you. Get out of my way.’”

Wisdom adds that dogs will pick up on the owners’ anxiety or impatience.

“If the owner gives off insecure vibes, the dog is going to be insecure,” she says. “That’s why expectation is 98 percent of training.”

But, she is quick to add that there is a proper way to show your pooch who is in control.

“I don’t advocate being so harsh that you’re yelling,” Wisdom says. “You don’t help your dog when you’re tense because the tension goes right down the leash and your dog thinks, ‘Oh, he doesn’t love me anymore. I can’t trust that.’ They can’t trust someone who is out of control.”

Contrary to popular thought, you can teach an old dog new tricks. At least, most of the time.

“You can’t always completely eliminate every behavior, but it’s amazing what can be done with some management and redirecting,” Dittrick says. “We all think that, somehow, dogs are going to know how to function in the family, but why should they know all of this without information?”

Look for a story next month in the Pulse section on cats and their peculiar proclivities.