No need to knit to create warm winter scarf

Hello, my name is Katie, and I’m addicted to fabric remnants. I pick them up almost any time I’m in a fabric or thrift store. I just want to rescue those poor odds and ends and make them into something useful and beautiful. This flower scarf is an example. 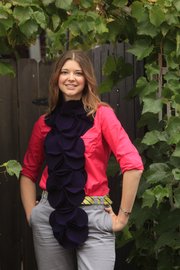 With cooler weather coming but not settled in yet, it’s a good time to make a scarf. Boiled wool is warm, won’t fray, and doesn’t have a “right side” or “wrong side,” which makes this pattern that much less complicated.

This scarf is inspired by one I saw in a catalog. It was selling for $135; this one cost about $4 — I used fabric from the scrap bin and thread I already had on hand — and took about four hours to make.

drafting compass (that’s the circle-making kind, not the north-finding kind)

For more photos of the scarf construction, go to remnantrehab.posterous.com

For more photos of this process, visit http://remnantrehab.posterous.com/geometric-flower-scarf.