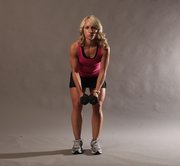 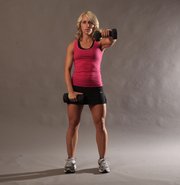 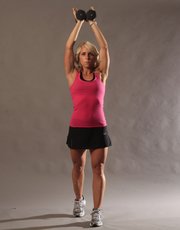 Natalie Wilkins, fitness assistant and personal trainer at Body Boutique, 2330 Yale Road, says most Americans tend to hunch their shoulders forward. Not a good look on anyone, and even worse for your posture.

“We’re a very front-rolled society, whether it’s working at the computer or driving,” Wilkins says. “It’s very important to have that posture with the shoulders up, back and down.”

Wilkins, Lawrence, says not only will the three exercises shown below contribute to better stature, they’ll help everyone look better in their clothes.

Stand with knees bent, feet together. Hold dumbbell in each hand (5 to 10 lbs for most women) in front of your legs with your palms facing each other. Lean forward, keeping back straight, so your upper body is at a 45-degree angle. Hold abs in. With a slight bend in your elbows, bring the dumbbells up until they are in line with your body. Return to starting position.

Stand with feet hip-width apart. Hold a dumbbell in each hand with palms facing thighs. Keeping elbows slightly bent, slowly lift one arm up to shoulder height straight out in front of you, in a controlled motion, then back down. Alternate arms.

Stand with one foot back, up on toe, to support lower back. Hold a dumbbell in each hand to the sides, with elbows at a 90-degree angle (like a field goal), palms facing each other. Press the weights overhead, stopping before they touch. Lower slowly to 90-degree starting position. Repeat.