Kathleen Morgan, development director for the Lawrence Public Library tries out one of 18 mini-golf course holes created and decorated by local businesses and organizations for the second annual Caddy Stacks fundraiser. The creative holes include Peanuts and Wizard of Oz themes, plus this one with giant rats created by Morgan and some of her friends. 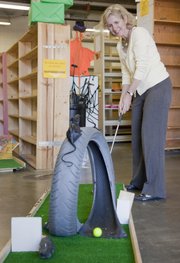 Kathleen Morgan, development director for the Lawrence Public Library tries out one of 18 mini-golf course holes created and decorated by local businesses and organizations for the second annual Caddy Stacks fundraiser. The creative holes include Peanuts and Wizard of Oz themes, plus this one with giant rats created by Morgan and some of her friends.

How often do you play mini-golf?

Cost: VIP party, $35 includes unlimited golf, drinks, appetizers and party pics; family greens fees are $5 per person or $20 for a family of up to six, with children ages 3 and under free.

Friends of the Library

“It wasn’t the typical day you have at the library,” John laughs. “I mean, I’d get in trouble for that in junior high.”

Ross attended the event last year with his wife, Cathy Ross, and says they had so much fun viewing the different themes at each hole he knew he wanted to be a contributor for one of the holes the next year.

The second annual Caddy Stacks fundraiser transforms the library into an 18-hole mini- golf course. Each hole is decorated by Lawrence businesses and organizations.

Kathleen Morgan, development director for the Lawrence Public Library Foundation, says the amount of creativity and work that community members put into their hole’s theme is amazing.

“You end up with a mini-golf course that reflects all corners of the Lawrence community,” Morgan says.

With the event on Halloween weekend this year, Morgan says she’s even more excited to see the “ghoulish” twist all the holes will feature.

Morgan says she’s excited to have Pollard as the special guest Friday. In his honor, a new hole called “Pollard’s Peril” involves putting a golf ball down a stairway.

“He’s such a colorful personality,” Morgan says. “I’d heard his favorite holiday was Halloween, and I thought he’d bring a lot of fun to the event.”

On Saturday and Sunday the mini-golf course will be open to families. Single tickets cost $5, and a family pass for six people costs $20.

Laser Logic’s mini golf hole is named “Witches & Wizards.” John and Cathy Ross and Brad Farmer, Laser Logic’s service manager, have been working on the design for the past month. Because Laser Logic is an office equipment business, Ross and Farmer gutted an old Xerox printer for the hole. The golf ball will pass through the printer where a sensor will pick up the movement and trigger it to display “Happy Halloween!”

“We’re going with the theme, ‘If Gremlins are haunting your printer, call the wizards at Laser Logic,’” Ross says.

Treanor Architects’s hole is based off of the children’s book “Skeleton Hiccups” by Margery Cuyler.

Kate Harding-Pohl of Treanor Architects says they wanted to go along with the Halloween theme but make it on the softer-side of scary for the event’s younger participants. She admits that for the team of architects the project has been a lot of fun to work on. Their team restructured the base to ensure it would last an entire weekend and equipped the hole with skeletons, a fog machine and sensors.

“We’ve had a great time,” Harding-Pohl says. “It’s been fun to be more creative in a different arena for us.”