Behind the lens: Nature livened up with the passage of time

A heron streaks across the trees at the Lake of the Ozarks. 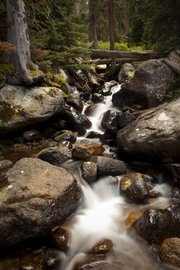 Water cascades down a stream near Ouzel Falls in Estes Park, Colo.

Photographing nature, in the traditional sense of the word, isn’t my strong suit, nor is it something I set out to do specifically. Whenever I make it the focus of an image, it’s usually because I have nothing better to do while waiting for some other person or thing to happen upon that natural setting.

I guess I’m of the camp that believes if you’ve seen one photograph of a mountain range, you’ve seen them all. They’re there. They aren’t going anywhere anytime soon, and there’s nothing I can do about it.

Instead of completely writing off the natural world that is responsible for the air I breathe, the food I eat, the water I drink and probably my male-pattern baldness, I’ve decided rather to coexist with it, concentrating on the parts that I find interesting, the parts that move.

Showing motion within a photograph or giving a sense of the passage of time can bring a little bit of life into a static scene. Because nature photography can look a little still for my taste, I often employ several techniques to show a little movement. One such way is to slow down the shutter speed. To make this picture of the heron, I used a shutter speed of 1/40th of a second and panned the camera with the bird when it took off in flight, which created the streaking effect of the sunlight hitting the trees behind.

With such a slow shutter speed and a fast-moving bird, it took more than a couple tries following the bird to get my body movement with the camera in sync.

The second image of the stream came from a vacation this year to Estes Park, Colo. For this photo I waited for a nice, big cloud to come overhead and diffuse the sunlight evenly over the scene to avoid harsh highlights in the water and on the rocks. I then set a longer exposure with a shutter speed of three seconds. Because I didn’t have a tripod with me, I set the camera on the edge of a bridge overlooking the stream and kept pressure on the top of it to keep it still. Keeping the shutter open for several seconds and the camera well secured allowed the rushing water to move throughout the frame, which creates the cascading effect.