Mix it up: Learn how to introduce pets to each other

Snowflake spent time with the other dogs in her new family in a neutral setting before her adoption was approved.

When Patrick Leach and Ana Perkin decided to get a second dog, they took their time: They prowled around the Internet for nearly two months before spotting an ad on Craigslist that advertised the sort of pet they were looking for: a small dog to keep their poodle, Winston, company. But the 11-pound puppy, Clarence, part-daschund, part-poodle, part-Chihuahua, turned out to be more than they could handle. 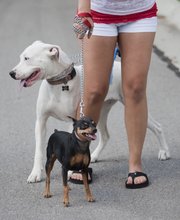 Snowflake is a bulldog breed adopted recently from Lawrence Humane Society into a family with two other dogs, including Lola. Snowflake is fitting in well and helping to calm one of the other dogs in the home.

Amanda Brittain, left, and Renee Rivera walk their dogs, from left, Lyric, Lola and Snowflake. Snowflake was adopted recently from the Lawrence Humane Society and is fitting in well with the other family dogs.

“Clarence wasn’t potty trained at all. and Winston was,” Leach says. “When they met each other, they gained each others’ bad habits. We could have trained them, but we were not prepared to pay money to do that, and we’re no Cesar Millan.”

Leach and Perkin ended up carting Clarence back to his former owner, disheartened.

Getting a second pet can be tricky.

“The first thing to consider is your current animal at home,” says Kayse Aschenbrenner, director of animal welfare at the Lawrence Humane Society. “Do you think they would enjoy having another animal in the home?”

If the answer is yes, your pet could certainly benefit by having another animal around, then don’t rush. Take your time, carefully selecting your pet’s companion based on its age, gender, social skills and energy level. And even when you think you’ve found the right fit, problems might crop up.

For instance, adopting a puppy, not yet potty-trained, into a home with a potty-trained pet can cause problems: if the puppy pees on the floor, the potty-trained dog, depending on its dominance level, might urinate over the puddle, masking the smell with its own scent. This is why the Humane Society advocates crate training for dogs. Crate training involves cramming a crate or kennel with toys, treats and a blanket, baiting the pup with kibble or biscuits, and praising him once he enters the cubby hole. The method is best used when the owner is at home and never as a form of isolation or punishment. At its most basic level, the tactic exploits a dog’s aversion to soiling its own living quarters.

“The dog meet is where the current animal and the shelter animal meet in neutral area ... to see if they will get along,” says Aschenbrenner. “It’s required for any breed of dog ... and it lasts as long as they need it to.”

It was at the dog-meet up that Amanda Brittain felt certain she’d found the perfect new companion for her current pets, an American bull dog and a miniature pinscher.

“The dogs wagged their tails and mimicked each other,” says Brittain. “They got along amazingly well.”

But before Brittain could adopt her new pet, Lyric, also an American bull dog, she had to prove her current dogs were up to date on vaccines, a Humane Society requirement. The animals in the shelter are already vaccinated, so no worries there. What can be troublesome, though, is picking up a stray.

“The biggest problems I’d say we see in general is people picking up stray cats, exposing their current pet to potential illnesses,” says Matthew Coles, a veterinarian at the Animal Hospital of Lawrence, 701 S. Mich. “A lot of times people bring in stray animals, not thinking about the potential diseases they might be carrying. It’s nice to save a kitty or a puppy, but you can bring any number of problems by letting them into the house.”

Particularly, stray cats can carry diseases that might not be visibly apparent, several that can be fatal: parasites, worms, feline leukemia and feline AIDS.

Coles says a checkup with a vet is crucial when adopting a stray. He also recommends a quarantine period for the new pet, and a slow introduction process, especially with cats, which are slow to warm up and should be admitted into the home gradually.

It might seem like a lot of hoopla, but if it works out, the payoff is pretty immense.

“She is honestly the best dog I have ever had,” says Brittain. “Her and our other dog, Lyric, have bonded so well they are like long lost sisters.”