Adaptation of ‘Fire’ not as bright as ‘Dragon’

By By David Germain - The Associated Press 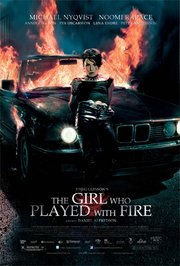 "The Girl Who Played With Fire" feels like a hasty knockoff compared to the adaptation of the first book in Swedish novelist Stieg Larsson's best-selling trilogy, "The Girl With the Dragon Tattoo." Still, it offers a fair dose of suspense and action for those who can stomach its brutal violence.

“The Girl Who Played With Fire” feels like a hasty knockoff compared to the adaptation of the first book in Swedish novelist Stieg Larsson’s best-selling trilogy, “The Girl With the Dragon Tattoo.”

The story falls back heavily on action from the far-superior first film, and the secrets revealed about its heroine’s dark and violent past are not exactly earthshaking.

Yet it’s hard to go wrong with a psycho-genius such as Lisbeth Salander, again played with pitiless, unbridled courage and savagery by Noomi Rapace.

This is a woman who will not back down from the harshest of obstacles or the most frightening of adversaries. So, she’s not going to let a little thing like a weak follow-up story completely spoil the party.

While uneven, repetitive and occasionally nonsensical, “The Girl Who Played With Fire” still offers a fair dose of suspense and action for those who can stomach its brutal violence.

The second installment in the late Larsson’s series casts Lisbeth as the prime suspect in the murders of a journalist and his grad-school girlfriend, who were about to expose a sex-trafficking operation involving prominent Swedish leaders.

On the run, Lisbeth uses her phenomenal computer skills and amoral, bloodthirsty detective methods to try to clear her name and track down some very bad types conspiring against her.

While Michael Nyqvist returns as Lisbeth’s journalist ally, Mikael Blomkvist, the sequel is missing the strange yet warm and amusing camaraderie that developed between them in the first movie.

Lisbeth is a loner on a quest this time, with Mikael following and aiding her movements from a distance. With only her foes to react against, Lisbeth often comes across as a two-dimensional vigilante, while Mikael on his own is simply dull.

Details from Lisbeth’s terrible childhood are uncovered, including the identity of her abominable father and a mysterious, unstoppable thug on her trail. The revelations are pretty silly and far-fetched, yet director Daniel Alfredson gives the action visceral punch with a bloody style that’s not for the squeamish.

The true asset covering for the story’s shortcomings is Rapace. Her combination of demented fearlessness and icy intensity make this tiny woman utterly believable as an avenging hellhound, and also great fun to watch while she’s doing it.

Rapace reprised the role for the upcoming third chapter, “The Girl Who Kicked the Hornet’s Nest.”

The big test for Hollywood is yet to come: If whoever plays Lisbeth in a planned English-language remake of “The Girl With the Dragon Tattoo” will be able to hold a candle to the fiery Rapace.

Here’s a reminder of tough foreign chicks and their counterparts in Hollywood remakes: ferocious Anne Parillaud in “La Femme Nikita” vs. kittenish Bridget Fonda in “Point of No Return.”

Let’s hope things turn out better with the Americanization of Larsson’s dragon lady.