Will the real perennials please stand up?

By By Lee Reich - For The Associated Press 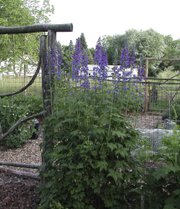 Delphinium blooms in New Paltz, N.Y. Perennial, among gardeners, usually refers to an herbaceous (non-woody) flowering plant — that is, one whose roots live year after year but whose top dies down to the ground each winter.

Now is a good time of year to think “perennial”: which plants really are, and which ones could be.

The word perennial, among gardeners, usually refers to an herbaceous (non-woody) flowering plant — that is, one whose roots live year after year but whose top dies down to the ground each winter.

There are ways to eke additional years from plants like lavender, delphinium and lupine. For starters, give them sites and soils to their liking.

Delphinium and lupine want a bit of summer shade to cool their heads (except where summers remain cool), and plenty of mulch around their roots.

Lavender is happiest basking in sun in perfectly drained soil. Plant it on a wide mound, if necessary, for better drainage. Back the plant up against a south-facing wall, preferably a heat-retaining one of brick or stone, and you further increase its chances of survival where winters are frigid.

Care for these sometimes-perennials doesn’t end with getting the site and soil just right. In areas with cold winters, further protect lavender by covering it with a loose mulch such as pine boughs or straw as soon as the surface of the ground has frozen about an inch deep. Delphinium and lupine also appreciate a bit of protection in cold winters — in this case, with mulch around, but not on top, of the plants.

In spite of your efforts, don’t be surprised to see the plants eventually die out. All is not lost even then. You could take stem cuttings and make young, new plants of any old plants that you want to keep going.

In some cases, especially lupines, plants might drop seed and, if the site is to their liking, grow new plants themselves. Those baby seedlings will not necessarily grow up to give flowers exactly the same as the parent plant, though. They may be prettier, less pretty or about the same.

Some annuals are perennial

Many plants usually considered annuals over much of the country are actually perennials in warmer regions. Tomatoes and peppers are two. Given eternal warmth, they would just keep growing and growing.

And you probably know that geraniums also can be perennial. They usually are grown as annuals, but the craggy, old plants often staring out from sunny shop windows, even sputtering forth a few red blooms in winter, attest to geraniums’ perennial nature.

Petunia is another garden perennial usually treated as an annual. You occasionally hear of some gardener who digs up her petunia plants every fall, pots them up and sets them indoors in a sunny window to bloom all winter. Out the plants go again in spring, and so on, year after year.

With a bit of help, many garden annuals that really are perennials can survive even frigid winters outdoors. Petunias are one, and the same can be said for snapdragons and pansies. In cold-winter regions, these plants have the best chance of survival when backed against a south-facing wall and given additional protection with mulch after the ground has frozen a bit. If snow accumulates where the plants sit, so much the better.

Pansies, like lupines, are especially good at self-seeding, so a portion of next year’s plants might not be over-wintering plants but new, self-sown seedlings. Like those lupine seedlings, each pansy seedling will look different from its parents. Perhaps better, perhaps worse — in any case, different.