Worth the Trip: Omaha

View of Rick's Cafe Boatyard and the downtown Omaha skyline from the Missouri River.

A waiter serves an Omaha steak at Spencer's for Steaks and Chops. 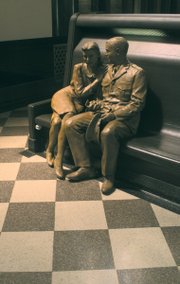 Sculpture at The Durham Museum.

The penguin exhibit at the Henry Doorly Zoo's Scott Aquarium.

It takes three hours and 15 minutes to drive from Lawrence to Omaha — most of the route, cruise-control easy — making it the perfect destination for an overnight excursion, a weekend or, for intrepid travelers on a budget, a long day trip.

Here are some suggestions for places to go, things to do and creatures to see in each scenario.

Omaha in a day

If you’re making it a day trip, do the zoo.

Omaha’s Henry Doorly Zoo is a must-see and home to the world’s largest indoor desert, nocturnal exhibit (aptly named “The Swamp”) and an expansive rainforest that almost makes you forget you’re not outdoors in the tropics.

Considered one of the country’s best zoos, the park is laid out so many of the exhibits are close together. The Scott Aquarium, featuring a wildly entertaining Antarctic penguin exhibit (supplied by four snow-making machines) and walk-through shark tank, is next door to the Butterfly and Insect Pavilion that abuts a giraffe complex where guests get up close (and almost too personal) with the long-necks.

On the other side of the park are the rhino, elephant and sea lion exhibits, which you can get to on foot, by tram or Skyfari, a chair lift providing bird’s-eye view of the entire zoo.

In the center of the property is Exhibition Madagascar, a new indoor-outdoor exhibit with fish, reptiles, fossa and lemurs on display. A 6,700-square-foot netted area features man-made trees linked by vines, allowing visitors to photograph ruffled lemurs without obstruction.

When your stomach starts growling louder than the snow leopard, head over to Durham’s TreeTops restaurant overlooking the Lied Jungle’s rainforest, hit one of the many concession stands or enjoy your own spread at one of several picnic areas in the zoo.

After lunch, relax in the Lozier Imax Theater and take in a show or treat your inner child to a ride on Sue’s Carousel next to Dairy World before heading home.

After the zoo, head north on 10th Street to the Old Market area with its brick streets and unique shops and restaurants all housed in charming 19th century warehouses. Many of the city’s best eateries are here, including Vivace at 1108 Howard St., M’s Pub at 422 S. 11th St., and the Upstream Brewing Company, 514 S. 11th St.

After dinner, take a short drive to the Bob Kerrey Pedestrian Bridge, gracefully spanning the Missouri River from Nebraska to Iowa. The cable-stay construction gives you an airborne feeling as you admire the view of downtown.

If you dare, stop for a nightcap on the deck at Rick’s Café Boatyard on the riverfront next to the City Marina and the River Walk, where there’s live jazz and always a party.

For breakfast next morning, take a pleasant walk to WheatFields Eatery & Bakery, 12th and Howard in the Old Market, named the best place for breakfast in the Midwest by Midwest Living Magazine in 2007. Everything is baked on-site and made from scratch here. Have the Dungeness Eggs Benedict. Just do it.

Make a weekend of it

If your plans allow you to stay two nights, Omaha offers activities for every interest:

Does anyone else see the irony in Lawrence.com promoting another Midwestern city instead of, you know, Lawrence?

That was my immediate reaction! Although a lot of hard work DID go into this article, it is very ironic. Who cares? Who DOESN'T love Omaha?

Or how about the fact two Lawrence bands Cowboy Indian bear and the Appleseed cast are playing in Omaha tonight? Make that Lawrence connection. Get some.

That's great and all, but do you really think that's the reason this story ran? Even if it was, L.com and this story didn't make that connection.

"A city as spread out Kansas City, except more conservative and without the good music."

Do you know anything about the music scene in Omaha? Apparently not.

I was raised in Omaha, went to KU, and definitely like KC & Lawrence better than Omaha, but if you're going to diss Omaha, have it be valid and know what you're talking about. Omaha's live music scene beats KC's any day.

Of all the things to pick on Omaha for, I don't think it is the music scene you should go after.

Sure, 311 is from there, but it also has a jazz heritage as rich as Kansas City's. They have a venue there called the Slowdown that's a nationally recognized venue as one of the best in the country. There's also a recording studio that plenty of Lawrence bands travel to Omaha to use. Then there's Saddle Creek Records who aside from having a roster that's featured/s acts such as Bright Eyes and the Faint, has done their fair share of helping out the Lawrence music scene - Kansas label Range Life Records is under the Saddle Creek umbrella. And you know our beloved Lawrence band the Get Up Kids' bassist? Rob Pope? Have you heard of his other band, Spoon? Yeah, they started on Saddle Creek, too. We owe a lot to them. Plus, Elliott Smith was born in Omaha. If you hate on his musical significance then you really don't a clue what you're talking about. Huskerjayhawk has a point. I could go on, but some people like to just hate.

And people just need to relax. Nothing here was saying that Omaha is 1000x better than KC/Lawrence. It wasn't like this article was a comparison chart. And it isn't forcing you to go to Omaha. Stay in Lawrence for the rest of your days and never explore a new city if that's what you really want to do.

really lawrence.com? fantastic way to promote this town. you're bunch of fucking clowns. get your act together because this used to be a good place to go to find things out about LAWRENCE.

Please try to promote Lawrence more often, because there is so much happening here that is way more interesting.

Why Omaha? It seems ironic that this city was picked to write about, why not KC or somewhere connected closer with our town.

I think we all know why this article was written. Bad choice! Lately there has been postings about things others don't want to hear about. How do you pick your topics?

This story was clearly intended for another audience (Go! maybe?). The story is also listed on LJWorld.com. Lawrence.com has become a dumping ground for LJW stories.