Author Chris Guillebeau comes to Lawrence Sept. 25 as part of his book tour to promote "The Art of Non-Conformity." 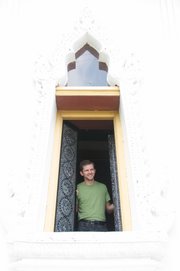 The new book "The Art of Non-Conformity" is about breaking through the brick wall of fear and finding the life you truly want. Its author, Chris Guillebeau, will be speaking in Lawrence Sept. 25. 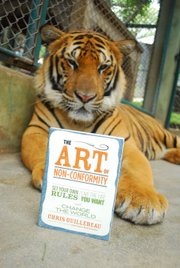 The new book "The Art of Non-Conformity" is about breaking through the brick wall of fear and finding the life you truly want. Its author, Chris Guillebeau, will be speaking in Lawrence Sept. 25.

Chris Guillebeau, author of "The Art of Non-Conformity"

Chris Guillebeau is looking for people who want to be extraordinary.

He’s looking for you.

Why? Because he wants you to cut out the excuses and make the leap to live an unconventional, remarkable, extraordinary life — whatever that means to you.

Guillebeau is the author of “The Art of Non-Conformity” — a book spawned from the blog of the same name, the goal of which is to teach the discontent of the world that it doesn’t have to be so.

“The central message is you don’t have to live your life the way other people expect you to, you can do good things for yourself and others at the same time. It’s not a false choice, a dichotomy,” the Portland, Ore.-based writer says. “I’m interested in helping people ... actually turning dreams into goals.”

He’s taking that message on the road for a 63-city “unconventional” book tour that makes a stop Saturday in Lawrence — 7 p.m. at Signs of Life, 722 Mass., on the way through all 50 states and the Canadian provinces.

That he chose Lawrence as his Kansas stop can be attributed to Glen Stansberry, a Lawrence web developer who met Guillebeau when the writer asked to join a blogging network Stansberry co-founded, lifedev.net. Stansberry says that Guillebeau has been part of the network for the past year and it’s clear why his is one of the site’s most successful blogs and why his book is trending so high on Amazon.com (it’s currently the site’s No. 1 career guide).

“I think his success has stemmed from not only being a great writer, but also having a goal that nearly everyone would love to do,” Stansberry says. “Chris has been able to create his own perfect life: He’s able to travel the world, work for himself and create his own job description. I’d have a hard time finding someone who didn’t want to do those three things.”

Among his large goals, besides working full-time to inspire others, is to travel the world. Guillebeau is aiming to visit every country in the world by the age of 35. He’s 32 now, and on pace, visiting 20 countries per year and chronicling his adventures on his home site, chrisguillebeau.com.

And before you think “I’d love to do that, but I can’t” — don’t. He’s heard whatever excuse you have before and characterizes vagueness as “comforting” and obstacles as “reassuring.”

“I would say the most common thing is to find some obstacle and say if only that was out of the way,” he says. “Or also maybe to look to the future, the vague, undefined future. You know, ‘X years from now, things will be different and I can do the things I really want to do.’”

Guillebeau’s nonconformist life started young, when he decided to skip most of high school and head straight to college. It worked out great, as he met his life’s love, Jolie, in college. But in the years to come, he felt he was going nowhere until the day he found himself sliding down an iced-over driveway on his way to his job at FedEx. Then and there, he made the life-altering choice that he no longer wanted to work for others.

He became self-employed and later spent four years in Africa volunteering for a medical charity — a job he calls “perfect.” That time in Africa is one of the reasons Guillebeau says his self-help message is different — it takes into account the struggles of others.

“I think it’s OK to have big dreams and do big stuff, I’m definitely a big fan of that, but we also have to find a way to kind of align our interests and our fun stuff with other people,” he says. “Because ultimately, that’s where we find satisfaction or meaning.”

When they returned to the U.S., the couple landed with his and hers goals: He would travel the world; she would become a painter. To this day, they’re doing just that.

“Chris’ journey has made me think closely about my own goals and ambitions,” Stansberry says. “If anything, seeing somebody carry out a massive goal is motivating, and makes me wonder why I can’t do something as inspirational. This guy is living a full life, and seeing that in action can be a quick kick in the pants to work on my own projects and goals.”