98-year-old Erma Morgan, frequents Body Boutique, 2330 Yale Rd., three times a week to walk on a treadmill and lift weights. Morgan has been active at gyms for about 20 years.

98-year-old Erma Morgan, frequents Body Boutique, 2330 Yale Rd., three times a week to walk on a treadmill and lift weights. Morgan has been active at gyms for about 20 years. 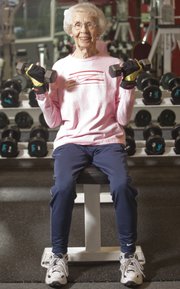 Mike Yoder/Journal-World Photo.Dorothy McGregor, 91, works out every day at the Lawrence Athletic Center.

Mike Yoder/Journal-World Photo.Dorothy McGregor, 91, works out every day at the Lawrence Athletic Center. Rotating through one of several exercise stations McGregor uses a recumbent stationary bike while watching the news Wednesday, Sept. 21, 2001,

Dorothy McGregor doesn’t like to drive much anymore. Erma Morgan is legally blind.

But, those little things don’t stop the Lawrence 90-somethings from hitting their respective gyms three to five times a week.

McGregor, 91, gets up at dawn most days to pump iron at the Lawrence Athletic Club, 3201 Mesa Way.

A schoolteacher in Lawrence for 40 years, McGregor says her students kept her plenty active during her working life.

“As soon as I retired when I was 66, I thought I guess I better get started,” she says. “I started going just two or three days, then it just became part of my routine. I do the whole shebang. The schedule is, one day it’s upper body and the next day it’s the lower body. But, it’s always free weights and the bicycle for cardio.”

McGregor says she appreciates the camaraderie she has with other morning gym rats at LAC, and the ease of coming and going at the early hour.

“I can have a big parking spot (in the back of the lot) to myself,” she says. “That way, I have to walk the farthest to get out of there and that’s a good way to cool down.”

While she takes few medications and enjoys excellent health, McGregor has had a few setbacks.

“I had both hips replaced — one in ’05 and one in ’07 — but I just hopped, skipped and jumped through that,” she says. “Nine or 10 years ago, I met a physical therapist over at the gym. We kind of connected and when I had my hips replaced, she told me what to do to keep my upper body going.”

Rick Sells, owner of LAC, has been happy to accommodate his senior client with some adapted equipment.

“She complained because most of the weight equipment jumps 10 pounds at a time. So, I took a bunch of weights and cut notches in them, so she has to go up only 5 or 2 1/2pounds,” he says.

Erma Morgan, 98, guesses she’s been a regular at Body Boutique for about 20 years, which means she signed up in her late 70s.

“I got some kind of offer, a coupon or something, and just decided one day to go,” she says.

A physical education major in college, Morgan burned calories in her younger years by raising a family, gardening and helping her husband build the house she still lives in on Indiana Street.

“Then, I worked until I was 70 at the Watkins Student Health Center as an office manager, which kept me running around,” she says. “I realized I needed more activity after I retired.”

“I do the treadmill and the weight machines and free weights. And stretching. I try to go three times a week, but I don’t always make it that often.

Lately, Morgan has scaled down her routine, opting for a workout that’s a little less intense. She is 98, after all.

Morgan has macular degeneration and no longer drives, which is why her son takes her to the gym and picks her up after her workout. Bob Morgan says his mom is a hard woman to keep down.

“About a year ago or so, she fell out in the backyard,” he says. “I wasn’t sure if she’d ever get back to the gym because she hit her head on a big rock and they had to take her to the hospital. She didn’t go for probably three months, but she recovered. She’s pretty tough.”

As she approaches the 100-mark, Erma attributes her longevity to her religious workout routine.

“I do it to keep mobile,” she says. “You know, if you don’t do anything you lose a lot of ability that you did have. My doctor thinks that’s what’s kept me alive.”