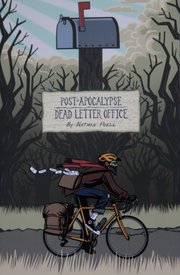 Writing about the apocalypse is nothing new. But while many authors focus on the events and circumstances that lead up to the world's end, less time is spent on what happens next. For local author Nate Poell, the idea of a post-apocalyptic world was enough to inspire his debut novel, "Post-Apocalypse Dead Letter Office."

Poell's novel focuses on what would happen to society after an apocalypse? How would we survive? How would we communicate? How would humans deal with the sudden and catastrophic changes to their lives? “I thought it would be better to get a variety of ground-level perspectives on the world itself and create a mosaic of sorts,” Poell says.

To do this, he arranged his book as a collection of unreceived letters written before the world ends. The collection of letters encompassed in the novel, begin at the end of the story and work backwards, chronicling the stories of the survivors and the deceased. But much is left to the reader’s imagination. The letters also tell the story of “the mysterious event that sends the world back to a technologically pre-industrial age,” says Poell. The novel does not merely unfold for the reader, rather the mystery continues throughout the book.

"Just because a letter wasn’t delivered, doesn’t mean the intended recipient is dead. I’d like for readers to think about what could have happened to them, and to the world itself, and generate their own ideas about what might have happened,” Poell says. Throughout the book, he has included clues and one or two red herrings as to what happened to some of the characters.

In Poell’s post-apocalyptic world much has changed, but many tenets of society remain. Of those remaining, many are stronger after having been broken down and rebuilt when necessity demanded sustainability and organization. “As far as the world in which the book takes place, it changed overnight — no gas, no electricity, and hence no Internet or telecommunications, no new paper, no mass media of any type,” says Poell.

Perhaps one of the most fascinating aspects of the novel is its online presence. A member of the online community on the website MetaFilter, Poell asked people to transcribe letters on whatever materials they deemed appropriate to exist post-apocalypse via the site’s mail art group. Since new paper would not be available after a catastrophic event, transcribers used scrap paper, chipboard, cardstock, or any other material that could potentially be found and put to use in the world encompassed within the novel.

The result of these transcriptions is a collection of creative letters, which are also part found object art. In one instance, the transcription of the letter appears on a microwaveable macaroni box, held together by bandages. Other letters are written right over leftover magazine pages, or on the insides of cereal boxes. One letter includes plastic glasses with colored frames, which are said to reveal secret information within the message.

Poell has previously published poetry in Kansas University’s Kiosk, and several nonfiction pieces with Mother Earth News and Brew Your Own. Though unrelated to his debut novel, Poell is close to finishing a second novel draft, developing two additional novel ideas and a non-fiction book in collaboration with others. All this writing takes a while, says Poell, because he has a great job and works with great people. "I don’t think I could give that up.”