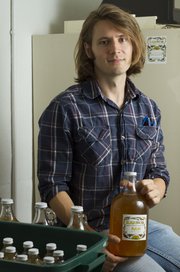 Despite its strange name, kombucha, a fermented tea, has become comparable to soda for the healthy set.

It’s a sweet-yet-sour fizzy drink — pronounced kom-boo-cha — that provides refreshment and a certain peace of mind for those interested in protecting the bacteria of the gut through the drink’s copious amounts of probiotics.

Started in China centuries ago as a run-of-the-mill fermented beverage, bottles of the drink are now sold around the world by the millions. There are all sorts of national and regional brands, all made from different types of tea (oolong, green, white, etc.), all with varying levels of tartness, sweetness, fermentation and fizziness. Some brands sweeten the raw tea with fruit puree, some use sugar, but most still have a tartness to them that can’t be missed, love it or hate it.

And Elliot Pees is banking on people in Lawrence loving it.

Pees is the creator of a brand of the drink made here in Lawrence called KANbucha. He’s got four flavors, sold currently at The Merc, 901 S. Iowa and he’s got plans to expand at some point to selling at other locations.

Two years ago, Pees was sitting down with his sister, Anna, enjoying a nice visit from his then-Austin-based sibling. During her stay, Anna introduced him to a batch of artisan kombucha, made by a Texas woman.

“She was the first one I had tried it from, and then I tried the commercial brands,” says Anna, who now lives in Manhattan. “The commercial brands are more carbonated, and they tend to be a lot stronger, where hers was much more mellow. It was just a softer kombucha.”

Pees loved the taste and the health benefits and thought others in Lawrence might like it too.

Turns out, after talking to a friend who worked at The Merc, he was right. According to the friend, kombucha was one of the hottest sellers in the refrigerated division at the market.

“It is a very, very popular category for us,” confirms Jez Luckett, the refrigerated buyer for The Merc. “It’s a drink that a lot of people are being introduced to and enjoying a lot more.”

Pees began experimenting, using the “scobys” or mother mushroom from the Austin-based maker. A mother mushroom is found in apple cider vinegar and other fermented products and it’s what gives kombucha both its probiotic stars and its sour taste. The probiotics provided by the drink are comparable to those live cultures found in yogurt, including lactobacillus bacterium, s. bouldardil, plus beneficial acids like glucuronic, lactic and acetic.

But before Pees could get his probiotics to the general public, a lot of experimentation had to take place first. After growing the scobys large enough to make initial batches, Pees hunkered down for a year-long trial-and-error process before the drink was ready to sell.

“I spent a lot of time trying to figuring out how much tea to use, how long to brew the tea for, how much sugar to use so that the culture would ferment for the amount of time that I wanted, and then at what pH level to stop the fermentation process, how long to keep it in the bottles to build up carbonation, and then, of course, what flavorings to use,” Pees says.

Those flavorings took time and thought. Kombucha’s best-selling brand, GT’s Kombucha, has a line full of fruit flavors such as “guava goddess” and “mystic mango.” Same too for LocalBucha, a kombucha out of Kansas City, which has several fruit flavors like “red berry” and “pineapple cilantro.” But Pees decided to shy away from most fruit flavors for the time being.

“At first, I tried to stay away from the fruitier beverages because the sugars in the fruit act as a secondary fermentation, and therefore make a higher alcohol content in the end,” he says. “So, I tried to stay with a little bit more herbal flavors.”

The herbal flavors that have made the cut so far are ginger and gingerose, plus Pees has both a plain raw type and a single fruit-flavored kombucha, grape.

Last year, he began selling bottles of his local brew, first at The Casbah Market, which rented him space in its kitchen, then later at The Merc and at the Tuesday Lawrence Farmers’ Market. Because he also has two teaching jobs, he’s kept KANbucha small, spending an estimated seven hours a week actively working on the product. Since the Casbah’s closing early last year, he’s also narrowed his focus to just selling to the Merc — from which he buys all his non-scobys ingredients — for now. He says he’d like to go back to the Farmers’ Market, but that he’d prefer to sell on Saturdays. He also says he’d like to move into other locally owned businesses, but like, anything, it’s just time and money keeping him from expanding.

Jez Luckett, the refrigerated buyer for The Merc, says that even in his chocked-full kombucha section, Pees’ little KANbucha stands out.

“It really stood against some of the national brands that we bring in as well as the LocalBucha, I really enjoy the product and thought that is had qualities that really set it apart from some of the other ones that we have. His ginger is really exceptional,” says Luckett of his initial taste-test of KANbucha. “To have a local provider, two local providers at that, is really great. They all do have different subtleties to them. ... All of them have a place and it seems that people have taken to them and chosen their favorite.”

wow, that guys is super hot! I hear they call him Ice Man!

I've heard of "Ice Man" Pees too. Not only is his KANbucha awesome, but he rips on a wakeboard.... he's on a level with Scott Byerly. You could say that he's the Scott Byerly of kombucha brewing.

Love this stuff! Typically stop by the Merc, on a weekly basis, and pick up a bottle or two.

Awesome! Way to go EP!! And for those of you who have heard him play classical guitar...well, it's hard not to fall head over heels for him <3