Kansas City native Linsey Lindberg is a street performer who "rolls up frying pans like burritos" during her act as strong woman Mama Lou. 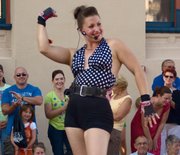 Kansas City native Linsey Lindberg is a street performer who "rolls up frying pans like burritos" during her act as strong woman Mama Lou.

$20 adults, $10 kids 12 and under, tickets through www.lawrencebuskerfest.com.

What: Documentary about the art of busking.

To listen to Linsey Lindberg speak, the most honest entertainment in the world is coming soon to Lawrence, Kansas in droves.

“A lot of times, if you buy a ticket to a movie, you pay for the performance in advance. If you don’t like it, you’ve already spent your money. At a busking show, only afterwards do they decide what it was worth,” says performer Lindberg, a Kansas City native.

The Fourth Annual Lawrence Busker Festival returns to downtown Lawrence from August 18-21 with a multitude of street performers, musicians and other surprising entertainers.

Lindberg, who performs as strongwoman Mama Lou, a character who “rolls frying pans up like burritos,” says she has always had a penchant for the circus style of entertainment.

“I didn’t want to be an obnoxious clown on the street and being an aerialist didn’t seem like it would work well. I needed to collect tips and I decided to be scary so no one would steal from me. I’m actually really strong, so I decided to be a strongwoman and thought, ‘Now, nobody will be able to steal my money!’ ”

Promoter Richard Renner says the idea for the Lawrence Busker Festival is completely home-grown. To the uninitiated, he describes busking as an eclectic mix of street performances, a wide range of “unique, unusual and useless skills.”

“It started with me walking around downtown, taking a look at the street performers we had, and thinking, ‘God, we can do better than this,’” Renner says. “Knowing that downtown is a good venue for street performing, as street performer myself, I could see the potential there, but there weren’t the performers. I thought, ‘Let’s make other performers aware of this.’”

Renner hopes this year’s incarnation of the Busker Festival will be the largest yet, and the most varied.

“What we’re doing is that we’re actually making the stages bigger,” he says. “Before, we’ve had two big stages and several little ones. We’ve eliminated a lot of the little ones now and we’ve got three big stages at Eighth, Ninth and Tenth streets.

“Over on Tenth street are the aerial artists that have been in front of the (Lawrence) Arts Center. They have their own rigging, and they’ll do aerial acts from the rigging. That’s kind of a big deal. We’ve got more artists coming from out of town than ever.”

Renner says besides the multitude of both scheduled and unscheduled street performances, the highlight of the festival will be a fundraising event at 7 p.m., August 18 at Abe & Jake’s Landing, 8 East Sixth, benefitting Big Brothers and Big Sisters of Douglas County. This preview event of the “best buskers we have to offer” will showcase a wide array of talent such as acrobatic juggling, sword swallowing, fire dancing and much more.

There will also be showings of the film “Busking the System,” a documentary about street performances in New York City that will be screened at the Lawrence Arts Center, 940 N.H., August 19 and the Granada 1020 Mass., August 20 and 21.

Renner hopes the festival will appeal to the entire Lawrence community. He says the wealth of entertainment possibilities should draw in a diverse crowd.

“It’s a good demographic for kids and moms and dads,” he says. “ But, I will say this: as the night gets going, yeah, then it changes over, a bit, more to the younger crowd. But, we have workshops for kids at the Lawrence Arts Center on Saturday morning to help teach them juggling and miming and hula hooping. Then as things are going later in the night, the fire acts start showing up. You don’t really want the kids doing that.”

Among the numerous local and national acts performing at the festival will be Overbrook resident Tommee Sherwood’s band Zydeco Tougeau.

Sherwood describes the three-piece band’s sound as “high-energy, accordion-driven dance music.” He says the Lawrence Busker Festival offers a unique opportunity to a street band like his.

“We’re looking forward to the enthusiasm of the crowd. It’s the one time of the year when people are coming to listen to us. Usually, we play to people who are on their way somewhere else. We do this quite a bit and we get good crowds, but it’s just different.”

Sherwood says the festival is a good showcase for a plethora of art forms that many Lawrence residents don’t see on a regular basis. His band has performed at all four years of the Lawrence Busker Festival.

Hope the weather is good for all these events and venues. And Tommee, I sure wish Dalton was still here to play in your group. High energy indeed.

Buskerfest is awesome. If you haven't been, you're missing out. Be there!!

Bring it on ..... for fun,pleasure and getting together.

I'd rather Lawrence be known for the busker fest than the most expensive place to live in Kansas.

Why don't you move to Johnson County? Nothing but safe chain restaurants/stores as far as the eye can see. Sounds like the place for you.

Why? She is pretty hot actually.

Miss Linsey is quite sexy wish she had bigger frying pans to use for her performance but I bet she has a nice burrito! Rock on girly!!!

If city leaders were smart, they'd kill off the busker fest... Kansas has enough going on right now to make it the laughing stock of the country.

How does having a little fun make Lawrence a "laughingstock?"

I take it that you'd rather we be the Sad Sacks of the country.

Is this girl's name Lawrence Busker? She's the only one they seem to have photos of, here and on ljworld. Is she the featured act or something? We get it, she's pretty! What else ya got?

Seriously though, I think the Busker Fest is a really cool idea and I can't wait to take the family.

I have attended this every year. We make it a family fun day, watching the shows, having dinner and eating Ice Cream, perfect Saturday night with the family. The shows are the perfect combination kid friendly and adult entertaining, we love them. Renner does an amazing job of organizing this event and it gets better each year. Lawrence is an unique city and the perfect place for the festival, we are lucky to have it here.

mama lou is absolutely cool , a must see !

I got to see Mama Lou today, what a great performance, she really does put on an entertaining show! My daughter and I had a great time downtown today. I think it's a fun event.

I got to see Mama Lou today, what a great performance, she really does put on an entertaining show! My daughter and I had a great time downtown today. I think it's a fun event.