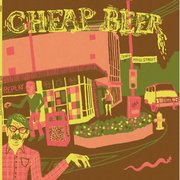 The first offering from newfound label Replay Records is "Replay Records Present: Cheap Beer," a collection of songs from local artists. "A lot of us local musicians have always talked about doing a compilation, anything like this," Brad Shanks, Replay Lounge manager says.

For the manager of the Replay Lounge, 946 Mass., Brad Shanks, coming up with a record label for local bands was a no-brainer. He and the bar’s owner Nick Carroll came up with the idea for the rock compilation “Replay Records Presents: Cheap Beer,” after realizing the local music scene had been waxing particularly strong as of late. The album will be released from the appropriately titled Replay Records label and will be accompanied by a series of three concerts taking place downtown on Friday and Saturday.

“That’s something that a lot of people have always talked about — how we need a compilation of local bands,” Shanks says. “We did the ‘Spring into Summer’ concert last year, Nick Carroll was talking about how he’d love to do a record. At first I was like, ‘Are you sure? This is pretty expensive,’ but he’s a real supporter of local music and didn’t care. He didn’t know how to do it, so I put in some calls to the bands from ‘Spring into Summer,’ I knew a lot of bands from that, and it was easy to get together. It was a blast doing it.”

According to Shanks, this album is long overdue, and is the sort of thing local bands have been wanting for years. Shanks hopes this will be the first of several compilations released by Replay Records.

“A lot of us local musicians have always talked about doing a compilation, anything like this,” he says. “Trying to get something together that represents Lawrence and Kansas City, the music going on right now. Hopefully this will capture this time in our local music scene. There are a lot of good bands going on right now and have been for quite awhile now. Lawrence has always had good bands — it’s more like we have 15 really great bands, not to mention all of the bands that we couldn’t put on the album this time. Hopefully we can put out another one after this one comes out for those bands we had to leave off.”

Zach Campbell, a member of two bands on the compilation, the Mouthbreathers and Rooftop Vigilantes, and a Replay employee, helped Shanks with the release of “Cheap Beer.” He says from early on the two wanted the album to showcase the high-decibel, adrenaline-laced side to the current Lawrence music scene.

“We wanted to make this more of a punk record,” Campbell says. “There’s a lot of great bands in this town that aren’t necessarily punk rock, but we wanted to focus on the aggressive side of Lawrence. It’s been awhile since there’s been this many good punk bands in one spot, so we wanted to highlight that. It’d say the majority of the album is pretty loud and in your face. There’s a couple of more laid-back tunes, but overall, I’d say the record has a pretty punk feel to it.”

Campbell says he’s particularly excited to perform in the upcoming record-release shows. He says he expects a high-octane, fun experience and particularly anticipates seeing all of the other bands perform.

“I’m looking forward to playing both shows. I’m looking forward to watching the other bands that are playing. They’re all really great. Some of them I haven’t seen in awhile, so I’m really stoked. I haven’t seen Major Games in a long time, I’m excited to play with Fag Cop. I’m excited to play Friday night with all of those bands and then see the Nature Boys on Saturday night. It’s going to be great — it’s going to be a booze-fueled party, for sure.”

Charley Downey, drummer for the Spook Lights, thinks the whole project is great for the Lawrence music scene and is thrilled to be a part of it.

“I’m excited because it’s awesome. There’s so many really awesome bands in this town right now, especially now. In the past two or three years it seems like there’s been a renaissance in this town and all of these amazing bands have popped up. So, it’s cool that there’s a compilation coming out that’s going to kind of showcase that. It’s really great to be a part of it.”

Like Campbell, Downey says he’s looking forward to playing the record release shows, particularly due to the fact that the Jackpot Saloon, 943 Mass., also owned by Carroll, will soon be changing ownership.

“The shows are going to be amazing,” Downey says. “It’s also going to be a lot of fun. Number one, it’s going to be madness – there’s so many awesome bands playing that night. It’s also really cool, because that’s kind of the last hurrah for the Jackpot. They’re changing ownership and all that that stuff. That’s kind of a big question mark up in the air right now as far as if it’s going to be a viable venue. So, I’m excited to play that show, particularly for that reason.”

Shanks, also manager at the Jackpot, wants to make clear, however, the Jackpot will still be playing local music shows.

“The good news is, it’s not closing down, it’s new ownership. Nick sold to a couple; they want to keep doing shows that we’ve booked. The only thing they want to do is do some things cosmetically, throw some paint on. Pretty much, they’re just remodeling and not changing things, so it should be business as usual.”