Nearly everybody can relate to a story about bad cell phone etiquette. It’s a theme as ubiquitous as it is annoying: some inconsiderate person forgets to shut his or her cellular device off and annoys an entire room of innocent bystanders. The telephonic transgressor usually makes belated amends and then sheepishly turns the offending ringer off as quickly as possible.

But what if the person couldn’t turn it off? What if that person was dead?

Kitty Steffens, Lawrence, left and Jeanne Averill, Lawrence, practice a scene from "Dead Man’s Cell Phone" during a dress rehearsal. The play is set to open Friday evening at the Lawrence Arts Center.

This is the setting of the “Dead Man’s Cell Phone,” a play opening at 7:30 p.m. Friday at the Lawrence Art Center’s new black box theater and written by award-winning playwright Sarah Ruhl. As the play opens, a woman, Jean, is drawn into a man’s surprisingly twisted life when she approaches him at a restaurant after his repetitive ringing drives her to distraction.

Lawrence actress Kitty Steffens, who plays Jean in the production, says her character is rapidly sucked into a strange world of discovery as she finds out about the deceased title character’s life and business dealings through the contacts in his cell phone.

“She finds herself immersed in this man’s life, his career and family,” Steffens says. “She sets out on a journey and finds out who he really is through the eyes of his wife, brother, mother, and coworkers until finally falling in love with his brother. It’s a very beautiful and surreal dark comedy.”

Steffens calls the play a comedy with adult themes, something she says is a change to the Lawrence Arts Center’s productions.

“It’s a touching comedy. I think there are definitely some laugh-out-loud places and there are hopefully some places that are more poignant. It’s a nice combination of comedy and drama and farce. It really runs the gamut.

“So much of the theater produced by the Arts Center in the past has been for children or for families,” Steffens says. “While there’s nothing particularly explicit about this, it deals with adults and death and loving, and a little bit of sexuality. While it’s not horribly graphic, it definitely deals with some themes concerning love and death that aren’t for kids. “

Director Ric Averill, Lawrence, watches a scene during a dress rehearsal of the play "Dead Man’s Cell Phone" in the newly refurbished black box theater. “We’ve changed the space and configuration of the space –– in this case, the theater is all around you and the audience is kind of thrust into the middle of it. It’s a very intimate setting," Averill says.

“One of the things we wanted to do,” Averill says, “is be the place for all ages and stages of life. One of the places we haven’t had as much programming for is young adults. Of course, I’ve always

had a lot of plays I’ve wanted to do in Lawrence with adults. We've talked about creating a regional theater that is strong, pays its actors, and does interesting and challenging works. It's our desire to have an experimental, new-works oriented, fun adult and professional theater that does work a lot of people wouldn't see otherwise.

With these goals in mind, the Lawrence Arts Center is unveiling its newly remodeled black box theater – a space, Averill says, for “fun, edgier theater.”

“It’s been completely refurbished in terms of curtains and paint jobs and sets,”  he says. “We’ve changed the space and configuration of the space –– in this case, the theater is all around you and the audience is kind of thrust into the middle of it. It’s a very intimate setting. We’re going to use it that way more and more often.” 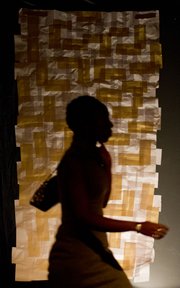 Executive Director Susan Tate says this new space will allow for a variety of theatrical activities.

“We have a wonderful space,” she says. “It has been used as a performance studio and an acting

and technical theater classroom. We have a space designed for adult theater and we are utilizing it to its fullest capacity. We’re looking to curate a season of theater by emerging playwrights suitable for a small and experimental space.”

residence, Nicolette Ross. Sculptures made of vellum and paper will hang in the theater.

Tate says she believes “Dead Man’s Cell Phone” is an excellent way to debut the black box theater and the new professional theater company, calling playwright Sarah Ruhl “one of the most highly regarded young playwrights in the country.”

“This play is dark and incisive and funny. Wry humor,” Tate says. “There are real moments and awkward moments in the play that make for ironic humor. Anyone who has a family and a cell phone will recognize moments in this play.”

Averill, who also directs the play, agrees, saying the play has been fun to work on and he’s excited for the upcoming performances.

“It’s been a ball. We all love this play. It’s a wonderful piece. We find new things in it all the time. We find ourselves laughing, making discoveries. We’ve all been feasting on working with such a ripe piece of theater.”

well, since the play is put on in the grain belt, you could say it is indeed rye humor... come on, tell me that's now wry! bwa ha ha ha.