"For Dorthea" by Roger Shimomura. This piece and others will be on display as part of the Lawrence Lithography Workshop's ongoing exhibit at the Belger Arts Center, 2100 Walnut St., Kansas City, Mo. 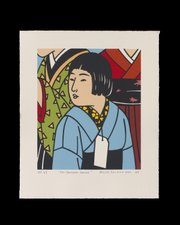 "For Dorthea" by Roger Shimomura. This piece and others will be on display as part of the Lawrence Lithography Workshop's ongoing exhibit at the Belger Arts Center, 2100 Walnut St., Kansas City, Mo.

Pieces from the Lawrence Lithography Workshop 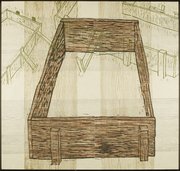 Pieces from throughout the Lawrence Lithography Workshop's 30-plus years is on display at the Belger Art Center, 2100 Walnut St., Kansas City, Mo.

In 1979, lithographer and print master Mike Sims opened shop on the 700 block of Mass. with the goal of collaborating with artists to produce hand-printed lithographs of original artwork. The process can be lengthy, depending on the complexity of the project. But despite the time-intensive aspect of his work, the Lawrence Lithography Workshop, which is now based in Kansas City at 20th and Tracy Ave., has built an impressive collection from their collaborative work with nationally known artists.

Prints from this collection will be exhibited at the Belger Arts Center, 2100 Walnut St. beginning today and running until Oct. 7. The art center is an ideal venue, as Sims now currently runs his workshop out of property owned by Belger Cartage Service, Inc.

Sims, who taught lithography and drawing at the University of Kansas from 1971 to 1978 made several moves to locales such as Chicago and El Paso before moving his shop to Kansas City. “I moved here in 2001, with the help and encouragement of the Belger Foundation,” says Sims.

Mo Dickens, gallery assistant at the arts center says this recognition for Sims is significant. “I don’t think the locals are familiar with what Mike does. Artists fly in from all over to work with him.” Sims’ recognition throughout the art community though, stretches far and wide. “I was in a gallery this weekend in Montana,” says Dickens, “they had three prints by Akio Takamori that were done in Kansas City at the workshop.”

In fact, Sims and the workshop staff have collaborated with many well-known artists. Included in the exhibition opening will be prints made in collaboration with Lawrence-based Roger Shimomura, William T. Wiley of California and Kansas City-based Peregrine Honig, who recently was named first runner-up on the Bravo TV show “Work of Art.”

In addition, a special set of prints by the late Luis Jimenez of New Mexico, who passed away as a result of injuries sustained from an accident in his studio while creating a sculpture for the Denver International Airport, will be included. “We’re going to go ahead and show the trial proofs,” says Dickens, referring to Jimenez’s work, “they’re not as Luis would have finally exhibited them, but we wanted to show the public what he was working on when he passed.”

Other artists’ work will be included as well. Among them, Nick Bubash of Pittsburgh, Tom Huck of St. Louis, Gesine Janzen of Montana State University faculty and others are expected to be in attendance for the opening. The exhibit will reflect the wide and diverse range of artists that travel to Kansas City for the expertise afforded them by Mike and workshop staff. “Our shop is pretty eclectic. Some of the prints from the show will be from the early years of the shop when it was in Lawrence. Other prints in the show will be more recent. It’s going to be interesting,” says Sims.

The shop, he explains, handles two types of business. The first is contracted printing, in which an artist will hire the workshop for a fee to gain access to the tools, materials and expertise needed to create prints of their work. The artist then acts as self-publisher for the edition, or collection of the created prints. On occasion a third-party printer, such as a museum or gallery, who will back the artist and make a profit off sales from the printed edition, will hire the workshop.

The workshop also acts as publisher as well. Upon invitation, an artist will work in the shop, and the Lawrence Lithography Workshop will publish the resulting prints. “We absorb all the costs of making the prints and then we market the prints ourselves to make profit and pay the artist out of those sales or with a percentage of the printed edition,” explains Sims.

The collaboration process for creating such prints takes several stages. First the artist must draw directly upon lithograph stones or plates. Then the printmakers use the marks made by the artists to create an original print, made by hand. “We don’t do any reproduction work. This isn’t photomechanical printing or off-set printing,” says Sims.

Whether you are familiar with lithography or not, the wide-range of styles and aesthetics are sure to offer something to your liking. “I think people will be interested to see prints executed from very traditional black-and-white lithography to fairly complex multi-color, multi-media prints with a combination of woodcut and lithograph pieces,” says Sims. “The whole emphasis is on the fact that all of these prints were done with a classic lithographic medium by hand.”