Payton Kelly showcases some of the art that has shaped the public image of Boulevard Brewing Company since the company's inception. 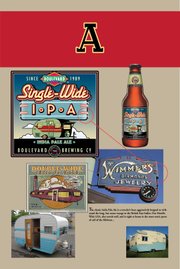 Payton Kelly showcases some of the art that has shaped the public image of Boulevard Brewing Company since the company's inception.

Kansas City’s Boulevard Brewing Company has long been loved in Lawrence for its stock of fine beers. But this Friday at The Eldridge, 701 Mass., the spotlight will be on the labels that adorn Boulevard bottles, not what’s inside of them.

Payton Kelly, creative director at Boulevard and designer since the company’s inception, will be showcasing the artwork that fed his label designs in the historic hotel’s Crystal Ballroom. He says the 20 to 25 pieces in the exhibition will include thumbnail sketches, notes and old package designs that normally reside on the walls of the brewery’s hallways. Kelly will be on hand to discuss the designs and any other Boulevard-related topics with the public.

At this one-night-only exhibition, fans of the brewery will have the chance to see what ideas inspired the creation of the label designs, as well as early designs and ideas for the beers that didn’t end up making the cut.

“You’ll see a lot of false starts and different rabbit holes we went down,” Kelly says.

Kelly says that Boulevard has tried to remain active with Kansas City’s First Fridays events over the years, and he hopes it will do the same with Final Fridays in Lawrence.

“We feel like it’s an extension of our hometown,” Kelly says.