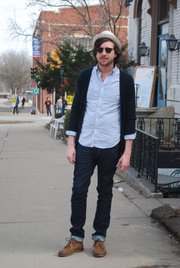 What were you doing when you were scouted? Walking around downtown.

How would you describe your style? Simple and classic — brown boots/shoes, button down shirt, and perhaps a hat.

What are your current favorite fashion trends? I like suits, but don't own any. Hats and ties are cool.

What are your least favorite fashion trends? I tried wearing a Snuggie, pajama jeans, and crocs out one night, but that didn't work, so I may harbor bitter feelings toward those articles of clothing.

What would you like to see more of in Lawrence? A grocery store to replace Borders on Seventh and New Hampshire.

What would you like to see less of in Lawrence? Homework

Do you have any piercings/tattoos? I have commitment issues with tattoos.

Do you have any fashion influences? Anyone that shops for me.

People say I look like... Nicholas Cage has come up a few times, but I really don't see the resemblance.

Tell us a secret: I wear clip-on ties.

Nick Cage? Nah, but from this angle you do have a little of the Arlo Guthrie thing goin'

He spends a lot of money to look like he shopped at a thrift store!

at least he didn't spend a lot of money to look like he shopped at target, that's the worst. i agree about the grocery store... how about a second merc?