The ballots have been counted and the awards have been distributed. Today we can officially reveal the winners of Best of Lawrence 2011. The community response was huge for the inaugural Best of Lawrence of the new decade. We'll be rolling out new winners hourly, today, so check back often.

To start, we have four categories, two highly contested, two not so much.

715 says thanks for being named the best new restaurant

With all the votes counted, 715, 715 Mass., has been named the best new restaurant in Lawrence in the 2011 Best of Lawrence competition.

Massachusetts Street has seen its fair share of new restaurants in the past few years, but this year there’s one newbie that stands out the most to Lawrence.com visitors: 715.

Executive chef Michael Beard trained in Italy and has slipped the old-world skills he learned into elevating traditional dishes with special touches such as homemade pork products. What’s more, many of the dishes are prepared with locally sourced and handmade ingredients. 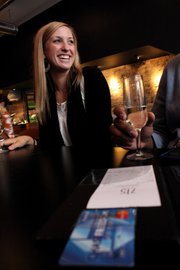 For those who can’t tolerate gluten, the protein that appears in grains like wheat, barley and rye, eating can be a minefield.

Making it a little easier is The Merc, which carries gluten-free baked goods, processed items and deli items. The variety of all-things-gluten-free is stunning and includes locally made gluten-free packaged foods and gluten-free books by local authors.

The Merc’s cooking class schedule even regularly includes ones aimed at teaching gluten-free cooking and baking techniques to those who are gluten-sensitive or knows someone who is. And there must be quite the number of folks in Lawrence who have gluten sensitivity because the “Gluten-Free Options” category was added this year after a grass-roots campaign on Twitter.

Madison Vaughn, 12, picks out some kumquats Wednesday, March 2, 2011, at the Community Mercantile while shopping for groceries with her mother.

Owner: It has a member-owner co-op format, with shoppers buying shares.

After a meal at The Mirth, Heidi LaSage, a KU senior from Minneapolis, Minn., uses the restaurant'sfree Wi-Fi to work on her computer.

We live in a wireless world. That statement is as much a truth as it is a cliché. And when it comes to where to log on and unwind, The Mirth Café got Lawrence’s vote as the town’s Best Wi-Fi Hotspot.

A down-to-earth wait staff, bottomless cups of awesome Venezuelan coffee, a strong menu and relaxing environment contribute to a fine place to get some work done.

Open daily from 7 a.m. to 10 p.m., Mirth regularly offers a diverse rotation of menu specials while artwork from local artists is usually on display.

When it comes to complimentary Wi-Fi, the real clincher is the environment. After all, the Internet connection is likely the same from one place to another. The Mirth Cafe, with its quiet corners, corner location and plenty of natural light, makes for a great place to sit and surf.

While it might be a little counterproductive if you’ve got a to-do list, patrons 21 and older are welcome to bring their own bottle of wine.

And if that’s Facebook on your browser instead of homework or spreadsheets, we’re sure no one will mind.

Honorable mentions: It’s all in the network.

Rob Coleman, Jason Hoffman and members of the Johnny's Tavern West staff say thanks for winning Best Place to Watch a Game.

Johnny’s Tavern opened in 1953 in North Lawrence and has since expanded into the Kansas City market and out west to its second Lawrence location, on Wakarusa. In 1978, friends and Johnny’s lovers Rick Renfro and Doug Hassig bought the business and added a grill, meaning Johnny’s famous burgers were born.

Each of the six locations is a bit different, but what is definitely consistent is that the crowds flock to the sports bar anytime the Jayhawks are playing. A visitor can easily tell from the rise and fall of the patrons voices just how the game is going — a peek at the score is unneeded.

These days, bar-goers have more than burgers to enjoy, with Johnny’s adding an expanded menu along with its newer locations. Vistors can cheer on the Jayhawks while dining on fare such as salads, wraps and pizza.