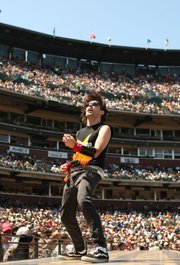 San Francisco air guitarist Hot Lixx Hulahan is a legendary performer and one of the many colorful characters associated with the increasingly popular competitive showcase that invites people from all over the country and the world to celebrate music and the fine art of performing with an imaginary instrument.

Tomorrow at Crosstown Station in Kansas City, Mo., the traveling showcase will hold its regional championship, the winner of which will go on to perform in the national competition, the next step on the way to the world championship in Finland, the birthplace of competitive air guitar.

With the Kansas City regional just around the corner, we talked to Hot Lixx about the importance of a good name, advice for our Lawrence air guitarists preparing for their regional debut and the unquantifiable trait that is Airness.

Trevan McGee: Can you describe the format of an air guitar show?

Hot Lixx: The minutiae of it is that there's two rounds, the first round is kind of your own freeform - the competitor brings in their own routine. It's 60 seconds and they get 60 seconds to convince everyone there - the audience, the people in the front and the people in the back, their mom, their parents whose basement they live in - that they're the best air guitarist out there. You can't use any props for your air guitar. You can't use a mic stand or anything like that. Your air guitar has to be an air guitar, but people incorporate all sorts of other accoutrements, which either adds or detracts from their ultimate routine.

After round one, at the end of each competitor's routine, they're judged on a figure skating scale that goes from a 4.0 to a 6.0 because we're classy and have to abide by classy rules. There's categories they're judged on. The first category is technical merit, which is how much what they're doing looks like the music we're hearing. In an air guitar sense that means your body locking into the groove of a song or what have you. Number two is stage presence, which measures how well you use and abuse your environment. And then third and most important and most ethereal is what we call Airness. And it's a lot like pornography. You can't really define, but you just know it when you see it.

TM: And you'll be judging, correct?

TM: Will you be performing during any stops on the tour?

HL: Bjorn (Turoque) and I have two opening numbers that we do. The first is sort of an opening number kind of thing, and the second, we refer to it as "getting the air circulating" and we bring people up from the audience and do a number with them and that kind of gets them involved a little. But aside from that, no.

TM: What are some of the key elements that a good performance has? 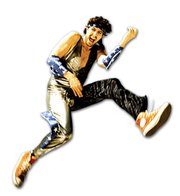 Bjorn Turoque (pronounced "To Rock") is another judge on the tour. He and Hot Lixx both have performances planned to warm up the crowd before the competition begins. Turoque is the author of "To Air Is Human" and one of the people heavily featured in the documentary "Air Guitar Nation."

HL: Well the Airness factor goes a long way. At the end of the night, everybody kind of knows who won. There's usually one, two or three people who, if those people were to win, most people would be content with that. Some night's there's just one standout that's just head and shoulders above the rest, but usually there's two or three people who could do that.

I think what makes these people stand out is this Airness factor. This je ne sais quoi, to me that's the most important category because the others can be so strategic in their execution that anybody, with the right sets and practices can pull off the other two things. You know, if you have a coach, you can learn those other things, but Airness is something you're born with.

That's as Bjorn Turoque likes to say, "The second round is what separates the air wheat from the air chaff." The top five point winners from round one move on to round two and at that point, they're given a song we devise. So even if you've learned your routine top-to-bottom in the first round, you're still going to be required to perform to a song you might not even know in the second round.

You either have it or you don't. Some people like to rely on tricks, they put them in their back pocket and save it for round two. Some people are just charismatic enough to pull off round two just off their own personalities. That's what I like to see, what people can bring to round two.

TM: So how important is showmanship, then?

While I enjoy a big, theatrical presentation, that's not always a shoe-in.

That just goes to show that it's not crucial. It can help some people, but it can also hinder other people. I see a lot of people who are just technically so spot-on and you can just tell that if you gave them a guitar, they could play that solo, but if you put that on an air guitar stage and someone's standing in the back watching you, it doesn't look very exciting, somebody just standing there, playing every note perfectly.

Guitar players are often hindered by the physics of a real guitar and they don't take into consideration how much more of the stage you have to take up when you don't actually have a guitar that anyone can see.

TM: In that first round, how important is the song?

HL: It's important in that the person performing it needs to sell it. So if we're going to stick with the Kansas City/Lawrence paradigm, my favorite routine of 2010 was to a Shag song (performed) by a guy named (Peter) Stiff Dickens. He did that Shag song. If you've ever listened to Shag, you know - I hate to use such a harsh - they're terrible. [laughs]

His interpretation of it was amazing, and the fact that he went out to do such a song and that he knew the song and it was awkward - the whole presentation of it was genius to me. And consistently, he participated in numerous cities, I consistently gave him super-high marks because it's such a Š it's so well-done.

And so for him, that song was tantamount. For him to do that character and tried to pull off Van Halen, it absolutely wouldn't have worked. The song is crucial, but it's relative to the performer.

TM: What are some of the weirder songs you've seen performed?

HL: I saw a guy in San Francisco do a concerto in A Major. It was just kind of an orchestral piece and the guitar doesn't even come in until the very end. He made this 60-second edit and the guitar didn't come in until the very last 15 seconds. He looked like Thomas Dolby, with the suit and the funny glasses and he had the footstool, that classic guitarist footstool. That was pretty entertaining. I appreciate that.

And to sit there for 45 seconds and just take the audience's abuse while selling your character and be in the moment, I appreciate that from a performance perspective.

TM: Your name is a pretty good pun on "M*ASH." How important is a good name in air guitar?

HL: This is our ninth season in the U.S. alone, so you've got to assume that almost every air pun has been used already. Or abused. So at this point, thinking a little further outside of the box is necessary, if you want to be a good one. Or it can just take something sounds cool. It doesn't have to be an air pun or rock pun.

But "Mean Melin" is kind of funny because I'm trying to think of anything, even back to his childhood, and the meanest possible thing I can even think of him doing was just listening to Slayer. That's as mean as he gets, just listening to an angry band. That guy's never done a mean thing in his life, as far as I can tell.

At this point, a bad name will hurt you. You almost just have to make sure you don't come up with a bad pun that we've heard a million times.

TM: I have this list of stage names for Lawrence competitors. Can I read them to you and get your initial reaction?

There's another tenet: Any wiener references are usually pretty funny.

Pork Sword? I mean, if it was like Stake Sword or something hard like that, that's almost too macho, but Pork Sword is almost like a little cocktail sausage. 'It's a little pork sword!'

It's just not tough enough, that I enjoy it.

HL: That's pretty good. It's like a crossover into the real rock world. But they better bring it, if they're going to say attack and then just kind of half-ass it, it won't work.

HL: StackHammer? I don't even know what to make of that. It's like he spun a wheel and came up with two unrelated terms. I'm not sure where that could go. Hopefully they incorporate either a stack or a hammer into their routine to kind of make some sense of that.

HL: Is that a woman?

HL: If that's a woman, then I think she played in Kansas City a couple of years ago. Glory Wholesome is kind of Marilyn Manson/Twiggy Ramirez. it's one of those beautiful, ugly names. That's pretty cool. I can appreciate that.