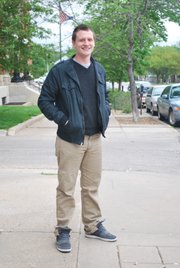 Sign: Someone told me once that I was on the cusp between Aquarius and Capricorn…

What were you doing when scouted? Surviving.

How would you describe your style? Basic. But I try to mix in some elements of style.

What are your least favorite fashion trends? Fake glasses with bright, oversized frames, old shoes and whatever it’s called when girls shave half of their heads.

What would you like to see more of in Lawrence? Lil B.

What would you like to see less of in Lawrence? Bassnectar.

Do you have any piercings or tattoos? No.

Do you have any fashion influences? Yeah, my dad for starters. And Ricky Brown.

Tell us a secret: Chinchillas can eat their poop because it still has nutritional value. Also, TeamBearClub first discovered Justin Bieber, but Phil Canty didn’t like the purple hoodie he was wearing so we sent him home.

He is 21 but has been married for 32 years....guess my public school education was not as good as I thought because this does not compute

This guy is a complete tool. Hot girlfriend though.

Ryan Ogle - aren't you like 35? don't you have something better to do than spend half of your life answering questions on yahoo answers?

raw denim? what a babe