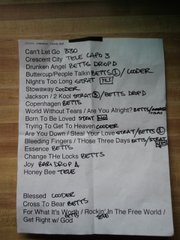 The setlist from the Lucinda Williams show at Liberty Hall. The encore was cut short, possibly because Williams was ill.

It was her first show in Lawrence in several years, and Lucinda Williams was sick. But she put on her black leather jacket and soldiered onto stage last night at Liberty Hall, 644 Mass.

Early in the show, she briefly warned the audience about her cold.

“It sucks,” she said between coughs and swigs of water.

The show did not, however, as Williams played a mostly upbeat set list that offered a taste of her latest album, “Blessed,” but was largely a walk down the alt-country maven’s hall of classics. She delighted long-time fans by opening with “Can’t Let Go” and, two songs later, “Drunken Angel” from 1998’s Grammy-winning “Car Wheels on a Gravel Road,” the quintessential Williams album for many — and thus, perhaps, the one an artist might get sick of referencing. But later in the show she happily ripped into “Joy,” a bluesy self-empowerment anthem recently adopted by some factions of the Occupy protest movement. The crowd sang along with abandon, fists pumping into the air. Rolling Stone named “Car Wheels” among the 500 greatest albums of all time for a reason.

While Williams didn’t directly reference the political, she quickly cited the current Penn State controversy and other news items in introducing “People Talkin’,” a swinging diatribe against the world and the sorry bastards who populate it (“Livin’ is full of misery and pain/ Somebody called you a dirty name”).

“There is so much to be pissed off about right now,” Williams told the cheering audience. Also from 2003’s “World Without Tears,” she played the crowd-favorite title track, as well as “Real Live Bleeding Fingers” and “2 Kool 2 Be 4 Gotten” (inspired in part, she said, by the Birney Imes photography book “Juke Joint”).

The four-piece band reimagined two songs from 2001’s “Essence”: “Steal Your Love” got real funky with the help of bass player David Sutton, and guitarist Blake Mills, who had gone solo as the opening act, put a psychedelic riff on that album’s title track.

For most of the evening, though, Mills worked a mean slide on his guitar strings — the sound of which feels at home on any Williams cut but has a larger presence on the “Blessed” album than on many of her studio recordings.

From that record, Williams had Liberty Hall swaying and lighter-flicking to the tender proclamation “You Were Born to Be Loved,” and she poignantly introduced “Copenhagen” as a meditation on hearing of longtime manager Frank Callari’s death while touring in Europe (“You are flecks of light/ You are missed”). Crowd members audibly oohed and aahed over that soft melody, which twinkled thanks to longtime drummer Butch Norton. The song inspired Williams’ first-ever music video, a haunting animation by Dave Ellis, co-creator of Cartoon Network’s “Squidbillies” (“’South Park’ on acid,” Williams said), for which Williams supplied a version of the intro song in 2010.

Williams unveiled the unrecorded “Stowaway in Your Heart,” an uptempo number with cheery vocal harmonies and lyrics about real-world love (“Thank you for giving me a place to hang around”) and covered “Tryin’ to Get to Heaven,” a song by major influence Bob Dylan, for whom she recorded a song on a recent Hank Williams tribute.

After closing with the hard-rocking “Honey Bee” from the 2008 album “Little Honey,” Williams returned for a three-song encore: the sweet title track from “Blessed,” the Allman Brothers’ “It’s Not My Cross to Bear” and Neil Young’s “Rockin’ in the Free World.”

The set list suggests that Williams cut the encore short — perhaps due to that nasty cold — by not playing the listed “Get Right With God,” the “Essence” record that won her a Grammy for Best Female Rock Vocal Performance. But she bid fans farewell with her first big smile of the night.

"It was her first show in Lawrence in more than 20 years,"

I wasn't able to go to it, but I know she played at Liberty sometime in the last decade.

I did make it to this show-- great performance by Lucinda and her band.

I'm pretty sure she played Liberty Hall in support of 'Car Wheels on a Gravel Road' which came out in 1998, so yeah, not 20 years ago.

Thanks, and sorry about that-- I obviously got ahold of some bad information (from more than one source). I've asked the editor to make a couple changes.

Just FYI, Williams also won the 2011 Americana Music Association Lifetime Achievement Award for Songwriting in October. And I agree, it was the Car Wheels tour when I first/last saw her at Liberty Hall.

Indeed, yes-- thanks, naturalist! That award did get a mention in my Lawrence.com preview of her visit (http://www.lawrence.com/news/2011/nov...) but should have been noted here, too. You guys are OWNING me. Thanks for being good readers.