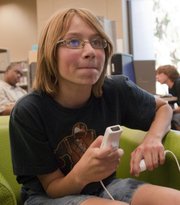 Nathan Fletchall, 12, concentrates on a game of “Super Smash Bros. Brawl,” on Oct. 5 at the Lawrence Public Library, 707 Vt. The library plays host to a teen video game tournament once a month.

At least a couple of times a month, Sean Rudisell dusts off his old Nintendo to play video games with his daughters.

Despite the 8-bit graphics, the side-scrolling gameplay and the blocky picture quality, Rudisell’s children relish in playing.

They each have a special skill: Jori is great with all of the memory card games, and Kaydi is master of the water worlds. They rotate controllers whenever a level calls for that particular person’s ability. Rudisell’s girls love to compete; Jori aiming to outplay Dad, and Kaydi trying to clobber her older sister.

“It’s a great way for us to spend time together while actually doing something,” says Rudisell. “It’s not sitting in front of the TV … and it has a competitive edge, which keeps things fun. These are the games I played growing up, and now they’re playing them.”

All of the technological innovations in the world cannot strip “Super Mario” of its charm. “Gears of War 3,” “Battlefield 3,” “Modern Warfare 3”: they might be best-sellers, but some gamers choose to thrust them aside in exchange for a dinosaur to ride (Yoshi) or a pink blob to inflate (Kirby).

While smooth graphics and blatant violence tend to saturate today’s video games, the most-violent scenes in “Super Mario” involve pelting fireballs at a Koopa or flattening a Goomba by landing on its head. There is no blood, no gore, no guns and no real violence. Yet its staying power is inarguable.

Just ask local teens. Every day, Lawrence Public Library attracts teenagers who want to play video games before they hunker down to do their homework. The library’s teen room has an Xbox 360, a Nintendo Wii and a shelf packed with kid-friendly titles.

“They love ‘Brawl,’” says Rebecca Power, in charge of teen services at the library, 707 Vt. “It’s a great game for them, and they’re totally happy to play it.”

Every third Saturday of the month, the Lawrence Public Library hosts a “Super Smash Bros. Brawl” tournament. Since the event’s inception, attendance has swelled. As many as 70 teens have come.

Philip Fukuto, a professional gamer and regional champion of “Super Smash Bros. Brawl,” offers lessons on perfecting a “Smash Bros.” strategy every Wednesday. And many local teenagers show a definite interest in getting better. The “Smash Bros.” lessons average 10 teens per session.

“I’ve had more teens than I could actually sit and play in the two hours that I was there,” Fukuto says.

Fukuto has witnessed a few mediocre to poor players polish their game to the point that they were winning first and second prizes at the monthly library tournaments.

“(One student) was one of the worst players, and now he’s winning,” Fukuto says. “It’s very reflective of life in that in order to get better at something you need to be dedicated … to improve. Sure there are kids who will just button-mash, but in the competitive environment, the kids that actually think about what they’re doing, they will undoubtedly do better than the peers that don’t.”

Logan Deshazer, 16, a junior at Lawrence High School, is an avid “Smash Bros.” player. He says it’s one of the more fun games to play, and he should know: He leads a video game group at his high school that meets weekly. Fifteen to 30 students attend regularly.

“It gives us a common interest,” Deshazer says. “We go in there and hang out and play ‘(Super Smash Bros.) Melee’ and have fun.”

Deshazer loves all sorts of games — role playing, fantasy, fighting. But his favorites are the classics.

“The classics are the best,” Deshazer says. “All the original titles. I can play all day without getting bored. It’s one of those things. It will always be fun.”