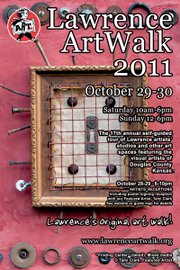 The 2011 ArtWalk poster with art from Tami Clark.

What: A self-guided tour of artists’ homes, studios and other creative spaces. More than 50 artists are participating.

For more information: Pick up a guide map at the Lawrence Arts Center, 940 N.H., or go online to www.lawrenceartwalk.org.

More than 50 artists are opening their homes and studios or sharing gallery space to talk about their craft as part of this year’s ArtWalk.

The free tour, which is Oct. 29 and 30, features artists in several mediums, including ceramics, drawing, jewelry, mixed media, painting, photography and sculpture.

“It’s an opportunity for them to show their work in their own environment, basically, apart from those (groups) who are showing their work in spaces downtown,” says director John Wysocki, who was been running the show for 16 of its 17 years.

Visitors can mingle with artists in their own creative spaces from 10 a.m. to 6 p.m. Saturday, Oct. 29, and from noon to 6 p.m. Oct. 30. Guide maps to all of the ArtWalk locations are available at the Lawrence Arts Center, 940 N.H.

Wysocki says that though they might sound similar in theory, the ArtWalk actually isn’t part of Final Fridays.

“We have a fantastic, new event, called Final Fridays, that happens now once a month, and some people refer to that as an ‘art walk,’ so I wanted to make it very clear that we’re the original, even though you have to get in your car and drive to see all the people,” he says, laughing. “But in the very first year, that we did it in 1995, it was a downtown-based event.”

Among the artists new to the tour is Tami Clark, who won the walk’s Featured Artist Award. She will be signing the ArtWalk posters that show her work during a reception from 7 to 10 p.m. Friday at 2211 Tenn.

For more information, go to www.lawrenceartwalk.org.

What's going on here? I thought there was no art in Kansas anymore! Someone needs to tell Gov. Brownback about this soon so he can shut it down!