To download the album for free (donations accepted): Go here. 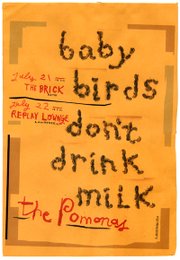 "Baby birds Don't Drink Milk and the Pomonas" by DJG. 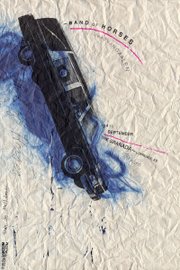 "Band of Horses" by DJG

"Built to Spill" by DJG

Throughout history there have been artists whose work has been inspirational for others in their fields, but who, for some reason, have not reached the same level of success that their peers have. In some cases, the artists maintain a solid underground following but don’t seem to break out into the mainstream.

The friends and admirers of Kansas City-based artist and poster maker Danny J. Gibson think he’s one such talented case. Rather than sit by and do nothing, however, they’ve organized a fitting musical tribute to Gibson. Led by friend, publicist and musician Chad Thomas Johnston, many local, national and even international groups have come together to offer up tracks on “DJG Was Here,” a free 35-track album available via the Internet.

The album coincides with an exhibition of Gibson’s, Quietly Contributing, where he’ll unveil a multitude of his artworks from over the years. The show opens on Friday at the 1819 Central Event Space and Gallery, 1819 Central St., Kansas City, Mo, in the Crossroads District.

“I’ve never found much comfort in the artist or designer labels,” Gibson says. “I guess my posters have flown the coop more than me, so that’s pegged me as a poster maker. I’ve been called worse. I’m showing well over 400 original concert posters, spanning the past decade, as well as various other posters from over the years. Along with this, if it will all fit in the gallery, is a great deal of original art, process work, drawings, spray paint stencils, notes and writing. I think it’s important to showcase all that goes into the work -- as the work to me isn’t all about a pile of posters.”

Gibson, who cites artists Stanley Donwood and Vaughan Oliver as inspirations, says he originally got into the poster-making business through his love of “art and discovery like a child,” and due to his many friends in the Kansas City music scene. He says he wants his work to exhibit a strong connection to the human side of art, eschewing what he sees as an over-reliance on computers in much of today’s graphic design.

“I find more and more a lack of (human connection) as computer programs grow stronger and people grow weaker. I’m not against computers — they are incredible tools — but many people rely on them too heavily. I’m also a big supporter of humor, imagination, whimsy and play. I’m thrilled whenever something somebody makes stops another somebody in their tracks long enough to get a kick out of it and take that inspiration along the walk with them.”

Curator for the album “DJG Was Here,” Johnston, says the “whimsy” Gibson looks for in life is very apparent in his work. Johnston says Gibson creates astounding pieces of art out of every-day objects – found art out of the most simple elements of nature that other people, other artists even, might take no notice of.

“He actually created a typography out of grass,” Johnston says. “It was amazing; it was simple. That’s kind of what he does, though — he sees potential in things that most everyone would overlook. Because of that, he’s been recognized in his industry, but it’s there’s difficulty creating (art full-time). This is a good opportunity for him. I’m hoping that some people will take notice of his work, it’s really pretty unique.”

Kansas City Artist and Musician Ben Chlapek, who performed a track on the “DJG Was Here,” compilation under the moniker Neatly Knotted says Gibson was a huge influence on his life and his artwork. He says when he first discovered Gibson’s work he was blown away.

“I found him because I looked through a whole magazine of the year’s best design. His work stuck out immediately. I thought, ‘I can’t believe this guy’s in Kansas City, so close to me.’ I thought it was a whole firm of people. I emailed him to see if I could have an internship. He said, ‘No, I do data entry for a living.’ I just think it’s so weird. For one reason or another, some people slip through the cracks or don’t get the recognition they deserve.”

Chlapek says he thinks the album is a fitting tribute for Gibson, though he’s surprised that projects like this don’t happen more often.

“I haven’t heard of anything in the same vein, really. There’s been a few compilations that have a certain theme to them, but I don’t think I’ve seen anything that really connects the music world to the poster world like this before. It’s kinda funny, because you’d think it’d be a no-brainer.”

Johnston, who also recorded the track, “Wrecked Ships Crashed Plains” for the compilation, says he thinks both the art show and the album, which he says is, “all over the place, a lot you can classify as regional indie rock,” will be particularly interesting to the music-going crowds in Lawrence.

“Lawrence is connected with a rich music scene and there are a lot of people who enjoy participating and going out to the Granada, the Bottleneck – wherever they’d want to go,” he says. “Some of the bands on this album have played a lot of local shows. Danny’s created a lot of posters that have been incorporated into a lot of the walls around town. So, it’s a mix of the musical and visual aesthetics that people can see and hear. The people in Lawrence will recognize that and feel at home.”