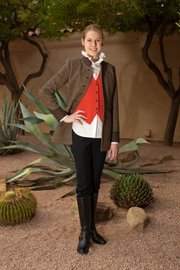 Ryal Mitchell models the equestrian-style outfit she made for the Make It With Wool contest.

You can see the excitement in Ryal Mitchell’s face as she talks about the equestrian-inspired outfit she designed for the Make It With Wool Contest.

“What I really enjoyed about designing and making the outfit was the fact that I could make it my own, and it didn’t have to be exactly like the pattern. I could add my own details and little accents, like the contrast fabric on the cuffs and collar — those details weren’t in the pattern,” she says. “Sewing a garment is a lot like a puzzle — it’s rewarding to be able to put all those pieces together and be happy with the outcome.”

The contest judges were apparently excited about the outfit, too, because in January, Ryal won the title of First Place Junior 2012 Wool Ambassador for her design.

Her outfit included black-lined, slim-cut slacks made out of wool barathea, which is a fabric made out of a combination of wool, silk and cotton; a vest made out of tomato-colored crepe, which is so named because of the gauzy texture and the crisp appearance of the fabric; a jacket body made out of tweed herringbone; and collar and cuffs made from a heathered flannel.

The nationwide contest was sponsored by the American Sheep Industry Association, which is a national organization representing the interests of more than 82,000 sheep producers. The contest was open to preteens through adults. Each contestant had to construct an outfit with fabrics made with at least 60 percent wool fibers.

Ryal has been interested in garment construction since she was 5, when she first began sewing by hand. When she was 7, she began using a sewing machine. Her favorite garments to make are dresses, and she is in wonderful practice from being part of 4-H and constructing and modeling garments for 4-H projects.

She became interested in sewing with wool specifically when she observed how versatile of a fabric it was; it can be used in many outfits that can be worn in warm or cooler weather. The fabric is also very forgiving, and one can easily make repairs or hide mistakes. Also, she says, outfits made with wool or wool-blend fabrics are simply beautiful and well-suited to any occasion, from dressy to casual.

Ryal says that for her next project, she’s going to tackle making various kinds of bags.

“I think the main reason that I love sewing so much is that it is a great way to express myself because there are so many variables — fabrics, patterns, details,” she says. “I can always create something new each time I sit down at the sewing machine. It’s so much fun, too, walking around in something that I’ve made, especially when people ask where I bought my garment.”

Interesting outfit, and an interesting color scheme. But the vest looks a bit small for the model. Or is it supposed to look that way?

I think perhaps the reason it looks small is because it's shorter than the untucked shirt underneath it.

Congrats to Ryal! That is quite impressive and I love the outfit!!!!! Looks like you could be the next Ralph Lauren.

Great outfit! I love the take off from a riding outfit. I remember fondly my days in 4-H.

Congratulations, Ryal! Great looking outfit, the details and the fit look wonderful. Best of luck to you with your future design endeavors!

Who knew there was an "American Sheep Industry Women" organization?