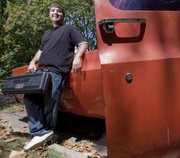 Jon Georgeson, owner of 24/7 Locksmith, says most of his work involves picking home or auto locks. Georgeson, 22, has been locksmithing for seven years.

On March 18, when Kansas University men’s basketball defeated Purdue 63-60 in the NCAA tournament, Jon Georgeson, owner of 24/7 Locksmith, spent the wee hours of his morning walking through “the war zone.”

“(I saw) kids walking around carrying each other,” he said. “It reminded me of a ‘Saving Private Ryan’ war zone; kids (were) helping each other get places and what not. … I was in the middle of the war zone, opening up cars and houses for drunk person after drunk person.

“I walked right up in the middle of some parties and everyone was like, ‘It’s the locksmith dude,’ kind of like the pizza dude.”

Georgeson, 22, has been locksmithing since he was 15. His stepfather owns Ace Locksmith in Topeka, and after school, Georgeson would head to his shop to start picking and rekeying locks.

“I sat in that shop literally every day after school and during the summer, working on locks and taking them apart and then putting them together,” he said.

With access to the shop, Georgeson was able to learn to pick antique and rare locks from a collection his step father had accumulated.

“There really are just so many different varieties of locks,” he said. “There are locks on the KU doors that are 50, 60 years old that are still working and operating, and you have to know how to do those.”

It’s repetition that teaches you how to pick a lock, said Georgeson, who can now unlock most within a minute or two. Exposure is also key, as there are nuances to every lock. And some get complicated.

“For BMWs, it’s like (a) Boy Scout password,” said Georgeson. “You have to tap a button on the center console where the clock is, then pop the handle out twice; then you’re able to use the power locks to open the doors.”

Before people call Georgeson, they often try their own hand at getting inside.

“I’ve seen people tearing up their car with no regards to it,” he said. “By the time I show up, I won’t even work on that door.”

As a locksmith who offers 24-hour service, Georgeson has to keep his weekends open in case he gets a call.

“I’m pretty much locked to the town,” he said. “Every locksmith knows, as soon as you try to do something, even if you haven’t gotten any (work) all day … it’s going to happen, so you might as well not do it. I try to sneak out on the boat a couple times (and when) I get on the water, I sit there for 5 minutes, just put the pole in and a call comes in.”

Many of the callers are drunk. Not all of them, of course. There are lots of people who simply erred, rushed out of the house, leaving the keys behind. But plenty of others are intoxicated.

“On the weekends, it completely goes wild,” said Georgeson. “If people are partying, most likely I’m going to be getting locksmith calls. Yeah, they had their good times, but they’re all locking themselves out. It’s a direct relation almost.”

Georgeson recognizes that the fee for locking your keys inside is steep, and to someone who has never had to call a locksmith before, it can be an unexpected blow on an already bad day. With that in mind, Georgeson offers inexpensive rates, agreeing to open some locks for as low as $30, and he is always willing to match competitors’ prices.

Once Georgeson had to unlock a 2006 Civic with automatic locks five times in one month.

Where does Mr Georgeson's responsibility lie if he unlocks a vehicle for someone who is obviously intoxicated then watches them drive away? And if they have an accident where deaths are involved?

I am not sure what is more irresponsible, a locksmith boasting that he open locks for drunk people, a reporter who does an article on it or a newspaper that uses it as a story. Almost ever middle aged person knows one, or more, people that have been killed by a drunk driver; I can off the top of my head think of seven that I have known personally.

Ethics? You will give an intoxicated driver access to his/her car for money? Wow!

First of all let me introduce myself. I am Jon Georgeson the owner of 247 Locksmith. I'll start by replying to the intoxication responsibility comment. First of all when I am completely aware someone is under the influence of some substance. I firmly state to them that they are not allowed to leave with the vehicle or let alone hand them the keys. I also inform them that they must pay me for my service and I leave the keys in the car with the door left unlocked. After I drive away I can not take responsibility for their actions that were in course from way earlier in the night.

Also as far as the insurance and license. If you did your home work, neither of those are required in the state of Kansas for a locksmith. Even though they do look great, I just have not got around to registering or testing for either. I am required to pay taxes and represent my business as a sole proprietorship though, which I have taken care of already.

As far as what happens when work is damaged. I can proudly say I do not rush through jobs and have had one simple mishap scratch on a tinted window in my years as a locksmith. I also pay for the damages incurred by me while on a job site out of pocket. So my customers have nothing to worry about. Unless they have problems getting half the normal price rates, faster service times, and quality service.

I currently rekey cylinders, install hardware, and unlock hardware. I do this all locally from Lawrence and I am proud to be a locksmith. Thanks for taking the time to read the article and the comments. Also sorry that my drunk statements didn't have enough room to be filled in to detail during the interview ... it was more of a joking gesture to the fact that my business does better on nights that people are out and about having a good time. Influenced by a substance or not.....