Pack it up: Put something different in kids' lunch boxes this year

Mix ingredients together, adding as much mayonnaise as needed to reach desired consistency. Season and chill. This salad serves well with cinnamon rice crisps as well as on sandwiches.

Place filling ingredients in layers in a line down the middle of each wrap, leaving room on all sides.

Drizzle dressing over ingredients in wraps.

Wrap rolls tightly, like a burrito. Cut on the bias and chill.

Serve plain or, for added flavor, with your favorite Asian dipping sauce. 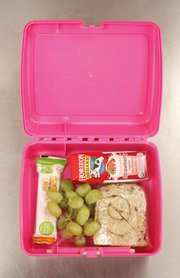 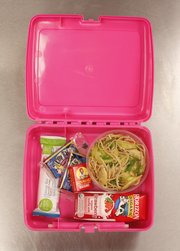 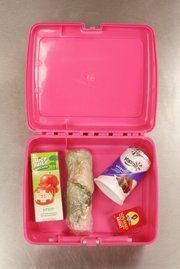 More creative but equally healthy main-dish lunch box options abound. This week, Go! teamed up with a grocery store chef and extension agent to bring you a few globally-inspired recipes plus tips on keeping those lunch boxes healthy and safe.

Tad Ingles, executive chef at Dillons Bistro, 4701 W. Sixth St., said his recipes for curry chicken salad, cold soba noodles and spring rolls should be easy to prepare and fun to eat, but also a way to subtly introduce children to new flavors.

Unlike the intensely spicy adult curries you might find at Indian restaurants, Ingles’ curry chicken salad is mild and sweet. It’s fine on plain bread, but even better — and more fun — on cinnamon-swirl bread.

A large batch of chicken salad could be made ahead and refrigerated for days, Ingles said, making slapping together a child’s lunch (or a sandwich or snack for anyone else in the family) a breeze.

Soba noodles — spaghetti-shaped Japanese pasta made with buckwheat — have more fiber, protein and slow-releasing carbohydrates than plain white noodles, and adding a few veggies and light sauce easily makes them a meal.

“You’re getting a lot more bang for your buck,” Ingles said.

This dish also can be made ahead, refrigerated, and needs no heating up at lunchtime.

Spring rolls have a few more exotic flavors (at least for some children), such as fresh mint and cilantro. But they’re bundled into palm-size burrito-like rolls with familiar ingredients like carrots and shrimp.

The shrimp or tofu from the recipe could easily be replaced with pork, steak, chicken or most any other protein you have on hand or left over from dinner, Ingles said. Same for the vegetables — they’re the same ingredients you’d use in a basic dinner salad.

To round out the lunch box, add a drink such as milk or 100 percent juice and even some dessert, though that doesn’t necessarily mean a fat- and sugar-filled candy bar or snack cake.

“Most of us crave something sweet at the end of the meal — at least I do,” Ingles said.

He suggested a square of sticky rice prepared with coconut milk, a fruit cup or even cereal bars, which can be sweet but usually have lots of fiber and nutrients.

Perishable food should not be at room temperature more than two hours, said Susan Johnson, family and consumer sciences extension agent with Douglas County K-State Research and Extension. If it’s 90 degrees or hotter outside, that window shrinks to one hour.

For lunches that need refrigeration, adding a cold pack in the morning should be enough to keep them safe until it’s time to eat, Johnson said.

She also shared a trick for lunchmeat sandwiches: They can be frozen and placed in a lunch box without a cold pack. They’ll stay cold as they thaw, and by lunchtime they’ll be ready to eat.

Johnson said many people mistakenly think that prepackaged items such as cold Lunchables or even string cheese can be sent to school at room temperature.

A simple rule of thumb, she said, is that if you bought it from a cold case at the store, it needs to stay cold.

“There’s nothing magical about those Lunchables to keep them safe,” Johnson said.

But for field trips or other situations where it’s a hassle to deal with cold packs or insulated containers, Johnson said, there’s always good old peanut butter and jelly.

Seriously? My children are regularly exposed to a variety of different foods and eat extremely healthy, however, I can almost guarantee that if I sent them to school with these lunches they would toss them. Not to mention, who has the time to prepare spring rolls for their child's school lunch! I was looking forward to creative, healthy, KID-FRIENDLY options.

I think I am going to use these recipes for my lunch but I am not sure I can get my kids to eat them.

I do some easy things for lunches. I've found that pita pockets work really well and you can stuff anything your kid likes into those. Mine also love PB banana rollups. You just spread PB on a tortilla & roll a whole banana in it. Slice it in half so it is easier to eat.

I really appreciate these recipes--I quickly run out of ideas for my daughter's lunches. She has always loved soba noodles and spring rolls, so she will be excited to find these in her lunch box. I'm not sure why people continue to think of "kid food" as being different from adult food. Kids will eat the same foods as adults if they are given no option from the beginning. I know kids can be picky, but I also think adults have the tendency to project their ideas of what is kid-friendly onto children's meals.

Thank you for these suggestions!

You can also get a good thermos and do soup or chili when it gets colder out. I bought the thermos funtainers and put hot items in those. The funtainers do an excellent job of keeping hot items hot. I've put not only soup & chili in them but also lasagna and chicken n' noodles without any issue.

Another website had the suggestion of putting hot taco meat & beans in the thermos and then including the fixings for a taco salad in the lunchbox.

We like to do combos with peanut (or any other) butter and apples or yogurt and pureed fruit. My youngest has taken to avoiding sandwiches so sometimes I just spread peanut butter on sliced apples.