From retro to regal, Lawrence stores are putting out a variety of Christmas decorating styles this season. A first floor display inside M Street Interiors, 835 Massachusetts St., is decked out for the holidays.

A decorated chandelier is part of the Christmas décor at M Street Interiors, 825 Massachusetts St.

A retro Santa greets visitors to Hobbs, 700 Massachusetts St. From retro to regal, Lawrence stores are putting out a variety of Christmas decorating styles this season. 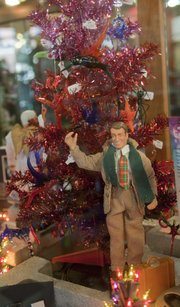 A Jimmy Stewart doll from the movie "It's a Wonderful Life" at Hobbs, 700 Massachusetts.

A unique tree ornament hangs on a display at Hobbs at 700 Massachusetts.

When it comes to freshening your Christmas decorating style, interior decorator Natashia Brown with M. Street Interiors, 825 Massachusetts St. in downtown Lawrence, says there’s no need to replace all of your old decorations. She suggests rethinking what you have and adding a few new ornaments to really spruce up your look.

“Often clients come to us because they want more of a themed Christmas design as opposed to the traditional decorations that they’ve built up over the years,” she says. “Or their tree is covered in their kids’ ornaments and they want to go for a more sophisticated look. So we’ll move those traditional ornaments to a room that’s not the main living area so that those ornaments are still up, but not in the room where they want a new look.”

Often, says Brown, a family has select sentimental ornaments that simply must be worked into their main display — usually in the living room — while other old ornaments can be used in places they haven’t before. Brown encourages clients to reuse their own ornaments whenever and wherever they can but says that key additions like artificial floral stems, new ribbons and a few new signature ornaments can breathe new life into a stale Christmas décor.

“Just adding some updated greenery and berries can really update your look,” she says. She also suggests touch-ups with marker or glue to make tattered ornaments like new again.

Think outside the box

Brown says tree toppers and ornaments don’t always have to go on the Christmas tree. She suggests moving your angel, star or Santa tree topper to a different spot, such as the mantel, with some new greenery and a mix of old and new ornaments.

In recent years, Brown says artificial floral stems have begun to replace the traditional tree topper, and there are plenty to choose from: greenery; silver, gold or frosted tree branches; branches with berries or pine cones; and poinsettias or holly, just to name a few.

Speaking of mantels, Brown says that a common mistake people make is to be too linear with their decorations. She suggests adding vertical greenery or branches.

Also, she says, it’s perfectly acceptable to work in nontraditional items to your Christmas décor. For instance, this year Brown used some old fashioned brass lanterns to complement a client’s rustic Christmas look.

Brown says oversized ornaments and floral stems and sprays featuring big berries and large pine cones have become extremely popular in recent years. Add just a few of these to update your décor.

Small is big, too

Even the smallest space can become home to an attractive holiday display. Brown suggests taking a second look at blank corners, small tables, shelves and even chandeliers, which can be transformed with ribbon, ornaments and floral stems. (Just make sure to not let decorations come in contact with hot light bulbs!)

Bling is the thing

“That’s pretty much with every theme and color scheme,” she says. “The sparkly, glittery, blingy look is definitely in, as well as ornaments that are made to look icy.”

If you’re opting for a color theme, Brown suggests choosing at least two colors and using them equally, or going with a main color and a contrast.

“Choose the main color you want — if you like the idea of the all-white tree, start there — but then you’ll want an accent color,” she says, such as a bright red.

Brown says that in recent years, she’s seen Christmas decorating colors become more eye-popping, with the exceptions of looks such as rustic or Victorian.

“It’s about the antique-y shimmery colors — nothing too bold or bright — and again, that plays into your old ornaments that can be mixed in.”

A good place to start is an artificial tree in a color other than traditional green, such as silver, pink or even black. Add some retro ornaments and décor, and you’re on your way to a very hip Christmas.

You can start by raiding your parents’ or grandparents’ collection of ornaments or keeping an eye out at summer garage sales, and then adding new ornaments made to look retro.

Swanson says a 1950s Buck Rogers-style Christmas look is achievable with some kids’ retro tin toy rockets in your display, along with a silver tree.

For a Christmas look that invokes the era of pulp fiction, Swanson has opted for “a spooky black tree with eerie flashing lights and wacky ornaments,” including hand-blown glass devils.

Though Hobbs carries a variety of retro and funky ornaments, it also carries updated ornaments that Swanson says can help create Christmas looks varying from “girly” to “traditional but whimsical.” Says Swanson, “We push very hard to be different.”