In addition to lighting the menorah and playing the dreidl, It's a Jewish tradition to prepare and eat traditional potato latkes — fried in oil — during Hanukkah. These were made by Nechama Tiechtel at Lawrence's Chabad Jewish Center. 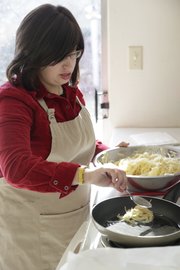 Nechama Tiechtel drops a spoonful of shredded potatoes and onions into a skillet of oil to make latkes at Lawrence's Chabad Jewish Center. Tiechtel makes latkes — a treat traditionally enjoyed during Hanukkah — the old-fashioned way, but there are also recipes for making them with zucchini or other vegetables.

Ariela Unz, who moved to Lawrence from Israel, has a number of her latke recipes written in Hebrew. This one is for Apple Cinnamon Latkes, one of the recipes she often makes for her family during Hanukkah. 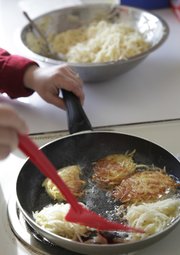 Nechama Tiechtel fries latkes at Lawrence's Chabad Jewish Center. Tiechtel makes latkes — a treat traditionally enjoyed during Hanukkah — the old-fashioned way, but there are also recipes for making them with zucchini or other vegetables.

Decadent treats are common fare for many holiday celebrations. In Jewish culture, there’s a religious reason behind this — at least during Hanukkah.

Oil plays a vital role in the Hanukkah story, and as such it’s essential to the holiday staples found sizzling on Jewish families’ stove tops this week.

“They’re both fried in lots and lots of oil,” Nechama Tiechtel said of traditional potato latkes and jelly filled doughnuts called sufganiyot. “It’s the one time of year we indulge in the calories.”

Tiechtel, the wife of Rabbi Zalman Tiechtel of Lawrence’s Chabad Center for Jewish Life, explained that when the Jews fought the Syrian Greeks more than 2,000 years ago, the enemy desecrated and extinguished the great menorah in the Jewish temple.

The Jewish people searched and found one last jug of sacred oil, still pure and sealed, and used it to rekindle their menorah. Miraculously, the small amount did not burn out at the end of the day but continued to burn for eight days, until the special process for preparing new oil could be completed.

The eight-day Hanukkah celebration, which began Saturday, represents the triumph of freedom over oppression and light over darkness.

“The miracle is with the oil,” Tiechtel said.

Families spend most evenings together or with other friends and family, lighting one candle on the menorah each night, playing the dreidl and eating.

“Every Hanukkah party, there will be latkes,” Tiechtel said.

Sometimes they’re eaten as a side dish, sometimes the main dish, but they’re always there, she said. Latkes vary from soft to crispy and can be made from a number of fruits or vegetables, depending on the cook’s taste.

Tiechtel makes traditional potato latkes like her grandmother did, which many people like to eat with sour cream or applesauce. She said they’re always a hit with her five children.

“They love latkes,” she said. “I think they wish it was Hanukkah more often.”

Ariela Unz, who moved to Lawrence from Israel five years ago, said it’s more common there to cook a variety of latkes — sweet potato, apple cinnamon and ricotta cheese are among her family’s favorites. Of course, they’re all fried.

“It’s lots of calories, but they are good,” Unz said.

Tiechtel and Unz said they cook Hanukkah doughnuts, too, but don’t usually make them from scratch.

Unz said her substitute for the time-consuming recipe is buying store-bought roll dough, frying it, then using a pastry bag to inject the centers with chocolate, jam or vanilla cream.

While variations are many, the staples of latkes and doughnuts are something everyone seems to enjoy during Hanukkah regardless of their denomination, Tiechtel said.

“That’s one of the beauties of holiday food,” she said. “It ties us all together.”

Grate potatoes and onion on the fine side of a grater, or in a food processor; or put in a blender with a little water.

Heat 1/2 cup oil in skillet. Lower flame and place 1 large tablespoonful batter at a time into hot sizzling oil and fry on one side for approximately 5 minutes until golden brown. Turn over and fry on other side 2 to 3 minutes.

Remove from pan and place on paper towels to drain excess oil. Continue with remaining batter until used up, adding more oil when necessary.

Serve with applesauce on the side.

(Recipe from “Spice and Spirit: The Complete Kosher Jewish Cookbook”)

Drain water but leave potatoes in pot, then cook over low to medium heat another 3 to 4 minutes, or until potatoes are very soft.

In medium bowl, mash potatoes with remaining ingredients, stirring until all ingredients are well mixed.

Heat oil in skillet, then lower heat to medium. Fry potato mixture by the spoonful, about 2 to 3 minutes per side.

Stir together eggs and sugar. Mix in flour, sour cream, vanilla and cinnamon. Add shredded apple and raisins (if using) and mix well.

Heat oil in skillet, then lower heat to medium. Fry spoonfuls of the apple mixture, about 3 to 4 minutes per side.

In a food processor, mix cheese, eggs, flour, sugar, oil and vanilla until smooth. Refrigerate mixture for half an hour.

Melt butter in skillet. Drop batter by tablespoon full into oil, frying about 1 minute per side or until golden.

From Hans Bertele, Gaya Patisserie Shop, Petach Tikvah. Preparing doughnuts at home takes some motivation. So if you decide to go to the trouble make a lot, freeze them and fry some each day.

Zest of half a lemon

Zest of half an orange

Sunflower oil (burns slowly and has no aftertaste), for deep-frying

Making ahead: After forming the doughnuts (step 6), place them on a tray lined with baking paper, wrap the tray in a plastic bag and freeze. Defrost for 8 hours in the refrigerator and continue according to the recipe (from step 7).

(Recipe from Janna Gur’s “The Book of New Israeli Food”)